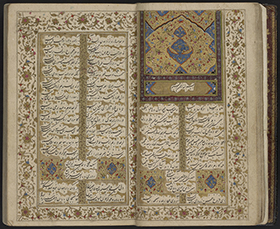 Very few remains in writing, except their Persian poems, have come down to us from the older Pantheistic mystics. In the Kingdom of the Caliphs heretical books were suppressed by stronger measures than being placed on the Index. To express views openly at variance with the established religion was to imperil one's life. The Persian Sufis, therefore, who in their mystical works generally used Arabic, veiled their views in a sort of technical language, which was quite unintelligible to the uninitiated. Still some works are preserved which give us an insight into their tendencies.

The Sheikh Suhrawardy, who was a martyr to his convictions, must be regarded as the chief representative of this freethinking tendency in Sufism. His works have been more appreciated by the Persians and Turks than by the Arabs, among whom copies of them are no longer to be found, while they may be met with in Turkish libraries.

Suhrawardy belonged to the orthodox school of the Shafiites, and gained a great reputation for his learning. He studied jurisprudence in Maraghah, then went to Ispahan, and later to Bagdad and Aleppo, where he occupied himself chiefly with philosophical studies. He gave himself the title "Disciple of the Spirit-world." In the Arabic biographies of him, his teaching is said to have aimed at overthrowing Islam; this, however, is always said of anyone who ventures to oppose the dominant orthodox party. As a matter of fact, he founded a sect who bore the name Ishrakiyya—"The Illumined." For them he composed a work, "Hikmat al Ishrak," i.e., "The philosophy of illumination," containing mystical and fantastic teaching. In Aleppo, where he finally took up his abode, he seems to have exercised a powerful influence on Prince Malik Zahir, the son of the famous Saladin. The orthodox party persuaded the latter to pass sentence of death on him as a heretic, which sentence Malik Zahir caused to be carried out (1191 A.D.), but not till he had received a threatening letter from his father for his dilatoriness. Suhrawardy is said when he heard the sentence, to have quoted a Persian verse:

"It is not worth while to draw the sword."

By his own consent, he was then shut up in a separate chamber and deprived of meat and drink till he passed into the world for which he longed. His tomb is still preserved in Aleppo, where the memory of him as "the murdered Suhrawardy" has by no means faded. The inhabitants say that no tree or shrub will grow in the tomb-enclosure. His real character has, for the most part, been forgotten, and he is represented as a magician and sorcerer who possessed the philosopher's stone, and knew how to make gold. Many even believe that he was never killed at all, but disappeared, while a phantom was put to death in his place. They say that at night weird sounds are heard from his grave.

These popular legends give us reason to suppose that Suhrawardy's life and death in Aleppo really made an extraordinary impression on the people, and that his teaching penetrated more deeply than Muhammedan writers find convenient to admit. Suhrawardy's writings were preserved from entire destruction by the Persians and Turks. The most important of them are the above-mentioned Hikmat al Ishrak, Haikal-un-nur (The Temple of Light) and others. From the two first a few passages may be quoted, which suffice to show that the theosophy of this Persian Sufi took a much bolder flight than that of the Arabian Sufis, and that for it Islam was a mere outward form.

In the Hikmat al Ishrak we find the influences of two entirely different schools of thought fantastically blended into an extraordinary compound of philosophy and mysticism. In this, Neo-platonic ideas are brought into connection with a theory of light obviously derived from Zoroastrian doctrine, and both are variously modified by the influence of Islamic monotheism and presented in the abstract terminology of the Arabic Sufis. With these last, Suhrawardy found himself in harmony with regard to their "ecstatic" stages and arrival at the knowledge of God by way of intuition. He also betrays the influence of the Perso-Shiite dogma of the hidden spiritual Imams, of whom only one is believed to be on earth at any given time, and he is the highest spiritual and religious authority among his contemporaries.

The following is an abridged translation of the preface to the "Hikmat al Ishrak": "Long have ye, O worthy friends and companions—may God protect you! prayed me to write for you a book wherein I should describe what has been revealed to me by way of inspiration in my lonely contemplations and soul-combats. Spiritual science is no class privilege reserved for the elect, behind whom the doors of the spirit-world are closed, and thereby he who would learn somewhat of the supernatural is excluded. Nay, He who graciously granted us this knowledge, He, the Horizon of Illumination, is not miserly with the secrets of the other world. The worst of all ages is that in which the carpet of free spiritual investigation is rolled up, the wings of thought are cramped, the gates of intuition closed and the road of contemplation barricaded.

"The world was never wholly without philosophy, and without someone who cultivated it and was declared a philosopher by manifest proofs and facts. This man is the real Caliph or representative of God on earth, and his successors will be so, as long as heaven and earth shall endure. The difference between the old and new philosophers only consists in the variations of their phraseology and of their methods of exposition and proof. All in common acknowledge the three worlds (the earthly world, the spirit world, and the world of Deity); all alike are agreed in Monotheism and in their fundamental principles.

"As regards the first teacher, Aristotle, it is clear that he is of incomparable value, that his wisdom is great and his faculty of penetration profound; yet we should not so exaggerate our reverence for him as to undervalue his masters, among whom especially are to be counted the travelling and law-giving philosophers, such as Agathodæmon, Hermes, Æsculapius and others. The line of their succession is long; the chief classes into which they may be divided are as follows: (1) The Theosophist without philosophy; (2) the speculative philosopher without theosophy; (3) the philosopher who is equally strong in both; (4) the Theosophist who is strong in theosophy but mediocre or weak in philosophy; (5) the philosopher who is strong in philosophy but mediocre or weak in theosophy, etc. Now if the complete mastery of both philosophic and theosophic science is found in one man, this man is the representative of God on earth. Failing such a person, the title devolves on him who is complete in theosophy, though he may be mediocre in philosophy. Failing him, the representative of God is he who is complete in theosophy without possessing any philosophy at all. There never fails to be in the world one great theosophist.

"But the speculative philosopher, fully equipped in philosophy, has no claim to the rule in this earth. For there is always a theosophist on earth and he is better fitted for the post than the philosopher, as the place of God's Vicar on earth cannot remain unoccupied. By this 'rule,' however, I do not mean the possession of political power; only the Imam who is also a theosophist may take over the political power and exercise it publicly, or he may rule in secret. In the latter case he is termed the mystical pole ("qutb"); to him the rule belongs, even though he live in the deepest poverty. If the political power should really come into his hand, the age becomes illuminated; but if it lacks such divine guidance, it is overwhelmed by darkness.

"It is nobler to aim at a high attainment at theosophy and philosophy alike than to confine one's effort to one or the other. This book is intended for those who devote themselves to both, and not to the latter only; in it we address ourselves only to the untrammelled thinker in the reign of theosophy; the lowest step which the reader of it should have attained, if he would derive any benefit therefrom, is at any rate to have felt a flash of the divine light reach him, and in some measure to have made it his own. Whoever merely wishes to study philosophy, let him attend the school of the Peripatetics; for that purpose it is good and sufficient. Just as we form certain sense-perceptions and recognise their conditions with certainty, and base further scientific investigations upon them, so in the spiritual realm we form certain perceptions and build upon them; but he who does not adopt this method, understands nothing of philosophy."

Continuing, he assumes a peculiar theory of light, which betrays a really Persian origin. One special light he designates by the old Persian word "Isfahbad." The Godhead Itself he calls the "light of lights." In other places he borrows from Neo-Platonism. He assumes a region in the heavenly spheres where the ideal prototypes of existing things are found. The saints and devout ascetics, according to him, have the power to call those ideal prototypes into real existence, and these can produce at their wish, food, figures or melodies, etc.

Suhrawardy's optimistic way of conceiving the world is peculiar for a Moslem. While Islam regards the world as a vale of tears, and earthly life as a time of temptation, he finds the evil in this world much less than the good. The following sentences of his work are noteworthy: "Know that souls in whom the heavenly illuminations are lasting, reduce the material world to obedience. Their supplication is heard in the Upper World, and fate has already decreed that the supplication of such a person for such an object should be heard. The light which streams from the highest world is the Elixir of power and knowledge and the world obeys it. In the purified souls is reproduced a reflex of God's light, and a creative ray is focussed in them. The 'evil eye' is only a light-power, which influences objects and injures them." Soon after Suhrawardy had been put to death, nearly the whole of his books were committed to the flames by order to the Caliph Nasir.