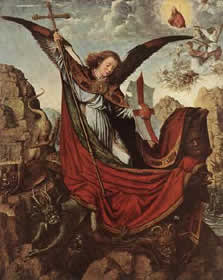 You can find references to spirituality in all sorts of places if you're open to them, including a lot of places you wouldn't normally think to look. This idea was recently brought home when I read Ed Kelley's article, "We Are a Table: What is the Role of Religion and Spirituality in Policing?" which was published in the periodical In Public Safety.

I was never a sworn officer of the law, but I did work for a federal law enforcement agency for several years and have a clear idea of the environment. To say that the work is stressful is to make a great understatement. Make a mistake one way, and you might kill (or ruin the life of) an innocent person. Make a mistake another way, and you might let a criminal go free to continue harming others. And those are only two of the possibilities; every day, a law enforcement officer walks a line between not going too far and not going far enough, while frequently risking his or her life in the process.

Yes, it certainly helps to be physically fit. A proficiency with lethal and non-lethal weaponry will also come in handy. But over the years it became clear to me that the ones who not only survived but who thrived in their careers were the officers who had a strong spiritual foundation. Why?

Spirituality performs two invaluable functions for law enforcement officers. It provides officers with a bedrock of moral belief, a base that not only keeps officers moral but also provides relief from stress by giving officers confidence that, whatever the outcome, their motivation was moral. Spirituality also enables officers to continually see other individuals - even individuals who have committed the most heinous, despicable crimes imaginable - as human beings.

What type of spirituality or organized religion worked better? Any spiritual path that emphasizes morality and caring about others would be helpful.

If you're a law enforcement officer who thinks spirituality might be a help to you in your day to day life, here are my suggestions:

First, don't go it alone. It's true that the requirements of organized religion or spirituality can be inconvenient, especially for people who work nights, weekends, and long shifts. But you will benefit greatly by gathering with others once a week in a spiritual place like a church or a temple to focus on higher matters. Additionally, a priest or rabbi or minister can provide valuable counseling, and no one ever lost his security clearance by seeking counsel from his pastor.

Third, volunteer. Whether it's helping those less fortunate or working with others to help the environment, you'll get more than you give when you get involved in doing something unselfish. Too often, the people a police officer sees on a day-to-day basis get divided into two groups; known criminals and people who are probably criminals. This can carry over into the non-work hours of a person's life and create negative hypervigilance. Volunteering allows you to mix with strangers who don't have to be looked at from a law enforcement perspective.

The above suggestions play to one of spirituality's greatest strengths for law enforcement officers; providing context. In a world where being the person who keeps the peace is more difficult than ever, that may be more valuable than anything in your bailout bag.