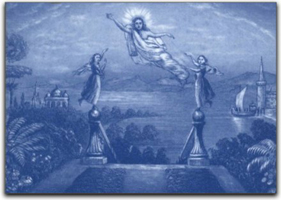 Image above is "Invitation to the Spirit Land" by Josiah Wolcott, 1853.

Interested in ghosts, spirits, and the question of what happens to us after death?  So were our ancestors, including those in the late 19th century who called themselves, "Spiritualists."  This is a fascinating area of study, whatever one's spiritual beliefs, and the following texts are sure to be of interest: