How Spiritual Life is Acquired 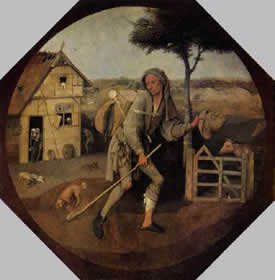 [This is taken from Emanuel Swedenborg's Spiritual Life and the Word of God.]

For there are two opposite spheres that surround man, one from hell, the other from heaven; from hell a sphere of evil and falsity therefrom, from heaven a sphere of good and of truth therefrom; and these spheres do [not immediately] affect the body, but they affect the minds of men, for they are spiritual spheres, and thus are affections that belong to the love.  In the midst of these man is set; therefore so far as he approaches the one, so far he withdraws from the other.  This is why so far as a man shuns evils and hates them, so far he wills and loves goods and the truths therefrom; for no one can at the same time serve two masters, for he will hate the one and will love the other.  (Matt. vi.  24).

It shall now be told how that life is destroyed by the faith of the present day.  The faith of this day is that it must be believed that God the Father sent His Son, who suffered the cross for our sins, and took away the curse of the law by fulfilling it; and that this faith apart from good works will save everyone, even in the last hour of death.  By this faith instilled from childhood and afterward confirmed by preachings, it has come to pass that no one shuns evils from religion, but only from civil and moral law; thus not because they are sins but because they are damaging.

Consider, when a man thinks that the Lord suffered for our sins, that He took away the curse of the law, and that merely to believe these things, or to have faith in them without good works saves, whether this is not to regard as of little worth the commandments of the Decalogue, all the life of religion as prescribed in the Word, and furthermore all the truths that inculcate charity.  Separate these, therefore, and take them away from man, and is there any religion left in him?  For religion does not consist in merely thinking this or that, but in willing and doing that which is thought; and there is no religion when willing and doing are separated from thinking.  From this it follows that the faith of this day destroys spiritual life, which is the life of the angels of heaven, and is the Christian life itself.

Consider further, why the ten commandments of the Decalogue were promulgated from Mount Sinai in so miraculous a way; why they were engraved on two tables of stone, and why these were placed in the ark, over which was placed the mercy-seat with cherubs, and the place where those commandments were was called the Holy of holies, within which Aaron was permitted to enter only once a year, and this with sacrifices and incense; and if he had entered without these, he would have fallen dead; also why so many miracles were afterward performed by means of that ark. Have not all throughout the whole globe a knowledge of like commandments?  Do not their civil laws prescribe the same? Who does not know from merely natural lumen, that for the sake of order in every kingdom, adultery, theft, murder, false witness, and other things in the Decalogue are forbidden?  Why then must those same precepts have been promulgated by so many miracles, and regarded as so holy? Can there be any other reason than that everyone might do them from religion, and thus from God, and not merely from civil and moral law, and thus from self and for the sake of the world?  Such was the reason for their promulgation from Mount Sinai and their holiness; for to do these commandments from religion purifies the internal man, opens heaven, admits the Lord, and makes man as to his spirit an angel of heaven.  And this is why the nations outside the church who do these commandments from religion are all saved, but not anyone who does them merely from civil and moral law.

Inquire now whether the faith of this day, which is, that the Lord suffered for our sins, that he took away the curse of the law by fulfilling it, and that man is justified and saved by this faith apart from good works, does not cancel all these commandments.  Look about and discover how many there are at this day in the Christian world who do not live according to this faith.  I know that they will answer that they are weak and imperfect men, born in sins, and the like.  But who is not able to think from religion?  This the Lord gives to everyone; and in him who thinks these things from religion the Lord works all things so far as he thinks.  And be it known that he who thinks of these things from religion believes that there is a God, a heaven, a hell, and a life after death; but he who does not think of these things from religion does not, I affirm, believe them.