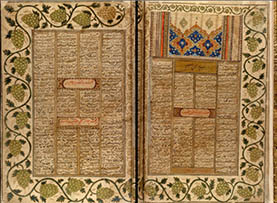 [This is taken from Claud Field's Mystics and Saints of Islam, first published in 1910.]

Rabia, the daughter of Ismail, a woman celebrated for her holy life, and a native of Basra, belonged to the tribe of Adi. Al Qushairi says in his treatise on Sufism, "She used to say when holding converse with God, 'Consume with fire O God, a presumptuous heart which loveth Thee.' On one of these occasions a voice spoke to her and said, 'That we shall not do. Think not of us an ill thought.' Often in the silence of the night she would go on the roof of her house and say, 'The lover is now with his beloved, but I rejoice in being alone with Thee.'"

When Rabia grew up her father and mother died. At that time there was a famine in Basra. She came into the possession of an evil man, who sold her as a slave. The master who bought her treated her hardly, and exacted all kinds of menial services from her. One day, when she was seeking to avoid the rude gaze of a stranger, she slipped on the path and fell, breaking her wrist. Lying there with her face to the ground, she said "Lord, I am far from my own, a captive and an orphan, and my wrist has just been broken, and yet none of these things grieve me. Only this one thought causes me disquiet; it is that I know not if Thou art satisfied with me." She then heard a voice, "Vex not thyself, O Rabia, for at the day of Resurrection We shall give thee such a rank that the angels nearest Us shall envy thee." Rabia went home with her heart at peace.

One night, Rabia's master being awake, heard the sound of her voice. He perceived Rabia with her head bent, saying, "My Lord, Thou knowest that the desire of my heart is to seek Thy approbation, and that its only wish is to obey Thy commands. If I had liberty of action, I would not remain a single instant without doing Thee service; but Thou hast delivered me into the hands of a creature, and therefore I am hindered in the same." Her master said to himself that it was not possible any longer to treat her as a slave, and as soon as daybreak appeared, he said to her, "O Rabia, I make thee free. If thou desirest, remain here, and we shall be at thy service. If thou dost not wish to stay here, go whithersoever it pleaseth thee."

Then Rabia departed from them and devoted herself entirely to works of piety. One day when she was making the pilgrimage to the Kaaba she halted in the desert and exclaimed, "My God, my heart is a prey to perplexity in the midst of this solitude. I am a stone, and so is the Kaaba; what can it do for me? That which I need is to contemplate Thy face." At these words a voice came from the Most High, "O Rabia, wilt thou bear alone that which the whole world cannot? When Moses desired to see Our Face we showed It to a mountain, which dissolved into a thousand fragments."

Abda, the servant maid of Rabia, relates as follows, "Rabia used to pass the whole night in prayer, and at morning dawn she took a light sleep in her oratory till daylight, and I have heard her say when she sprang in dread from her couch, 'O my soul, how long wilt thou sleep? Soon thou shalt sleep to rise no more, till the call shall summon thee on the day of resurrection.'"

Hasan Basri once asked Rabia if she ever thought of marrying. She answered, "The marriage contract can be entered into by those who have possession of their free-will. As for me, I have no will to dispose of; I belong to the Lord, and I rest in the shadow of His commandments, counting myself as nothing." "But," said Hasan, "how have you arrived at such a degree of piety?" "By annihilating myself completely."

Being asked on another occasion why she did not marry, she answered, "There are three things which cause me anxiety." "And what are they?" "One is to know whether at the moment of death I shall be able to take my faith with me intact. The second is whether in the Day of Resurrection the register of my actions will be placed in my right hand or not. The third is to know, when some are led to Paradise and some to hell, in which direction I shall be led." "But," they cried, "none of us know any of these things." "What!" she answered, "when I have such objects to pre-occupy my mind, should I think of a husband?"

Someone asked her one day, "Whence comest thou?" "From the other world," was her reply. "And whither goest thou?" "Into the other world." "And what doest thou in this world." "I jest with it by eating its bread and doing the works of the other world in it." "O Rabia," said another to her, "dost thou love the Lord?" "Truly," she replied, "I love Him." "And dost thou regard Satan as an enemy?" "I love the Lord so much," she answered, "that I do not trouble myself about the enmity of Satan."

One night she saw the Prophet (on whom be peace) in a dream. He saluted her and said, "Rabia, lovest thou me?" "O Prophet of God," she replied, "is there anyone who does not love thee? Yet the love of the Most High fills my heart to such a degree that there is no room for love or hatred towards anyone else."

On one occasion she was asked, "Dost thou see Him Whom thou servest?" "If I did not see Him," she said, "I would not serve Him." She was frequently found in tears, and, being asked the reason why, replied, "I fear that at the last moment a Voice may cry, 'Rabia is not worthy to appear in Our court.'" The following question was put to her, "If one of His servants truly repents, will the Lord accept it or not?" "As long as God does not grant repentance," she replied, "how can anyone repent? And if He does grant it, there is no doubt that he will accept it."

Once when Rabia had immured herself for a long while in her house without coming forth, her servant said to her, "Lady, come forth out of this house and contemplate the works of the Most High." "Nay," said Rabia, "enter rather into thyself and contemplate His work in thyself." Having kept a strict fast for seven days and nights in order to give herself to prayer, on the eighth night she seemed to hear her emaciated body say, "O Rabia, how long wilt thou torture me without mercy?" Whilst she was holding this soliloquy with herself, suddenly someone knocked at the door, and a man brought in some food in a bowl. Rabia took it and set it down; then while she went to light the lamp, a cat came and ate the food. No sooner had Rabia returned and seen what had happened than she said to herself, "I will break my fast on water." As she went to draw water her lamp went out. She then uttered a deep sigh, and said, "Lord, why dost thou make me wretched?" Whereupon she heard a voice saying, "O Rabia, if thou desirest it, I will give thee the whole world for thine own; but I shall have to take away the love which thou hast for Me from thy heart, for the love of Me and of the world cannot exist together." "Hearing myself thus addressed," said Rabia, "I entirely expelled from my heart the love of earthly things, and resolutely turned my gaze away from them. For thirty years I have not prayed without saying to myself, 'This prayer, perhaps, is the last which I shall pray,' and I have never been tired of saying, 'My God, let me be so absorbed in Thy love that no other affection may find room in my heart.'"

One day some men of learning and piety came to her and said, "The Most High has crowned His chosen saints with the gift of performing miracles, but such privileges have never been granted to a woman. How didst thou attain to such a high degree?" "What you say is true," she answered, "but, on the other hand, women have never been so infatuated with themselves as men, nor have they ever claimed divinity."