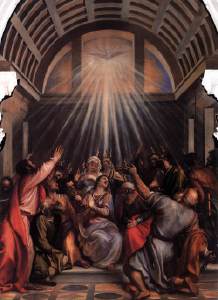 Recapitulation of all the doctrines hitherto laid down with respect to the influence of the Spirit—Objection to this, that the Quakers make every thing of this spirit, and but little of Jesus Christ—Objection only noticed to show, that Christians have not always a right apprehension of Scriptural terms, and therefore often quarrel with one another about trifles—Or that there is, in this particular case, no difference between the doctrine of the Quakers and that of the objectors on this subject.

I shall now recapitulate in few words, or in one general proposition, all the doctrines which have been advanced relative to the power of the spirit, and shall just notice an argument, which will probably arise on such a recapitulation, before I proceed to a new subject.

The Quakers then believe that the spirit of God formed or created the world. They believe that it was given to men, after the formation of it, as a guide to them in their spiritual concerns. They believe that it was continued to them after the deluge, in the same manner, and for the same purposes, to the time of Christ. It was given, however, in this interval, to different persons in different degrees. Thus the prophets received a greater portion of it than ordinary persons in their own times. Thus Moses was more illuminated by it than his contemporaries, for it became through him the author of the law. In the time of Christ it continued the same office, but it was then given more diffusively than before, and also more diffusively to some than to others. Thus the Evangelists and Apostles received it in an extraordinary degree, and it became, through them and Jesus Christ their head, the author of the Gospel. But, besides its office of a spiritual light and guide to men in their spiritual concerns, during all the period now assigned, it became to them, as they attended to its influence, an inward redeemer, producing in them a new birth, and leading them to perfection. And as it was thus both a guide and an inward redeemer, so it has continued these offices to the present day.

Now an objection will be made to the proposition, as I have just stated it, by some Christians, and even by those who do not wish to derogate from the spirit of God, (for I have frequently heard it started by such) that the Quakers, by means of these doctrines, make every thing of the spirit, and but little of Jesus Christ. I shall therefore notice this objection in this place, not so much with a view of answering it, as of attempting to show, that Christiana have not always a right apprehension of scriptural terms; and therefore that they sometimes quarrel with one another about trifles, or rather, that when they have disputes with each other, there is sometimes scarcely a shade of difference between them.

To those who make the objection, I shall describe the proposition which has been stated above, in different terms. I shall leave out the words “Spirit of God,” and I shall wholly substitute the term “Christ.” This I shall do upon the authority of some of our best divines.... The proposition then will run thus:

God, by means of Christ, created the world, “for without him was not any thing made, that was made.”

He made, by means of the same Christ, the terrestrial Globe on which we live. He made the whole Host of Heaven. He made, therefore, besides our own, other planets and other worlds.

He caused also, by means of the same Christ, the generation of all animated nature, and of course of the life and vital powers of man.

He occasioned also by the same means, the generation of reason or intellect, and of a spiritual faculty, to man.

Man, however, had not been long created, before he fell into sin. It pleased God, therefore, that the same Christ, which had thus appeared in creation, should strive inwardly with man, and awaken his spiritual faculties, by which he might be able to know good from evil, and to obtain inward redemption from the pollutions of sin. And this inward striving of Christ was to be with every man, in after times, so that all would be inexcusable and subjected to condemnation, if they sinned.

It pleased God also, in process of time, as the attention of man was led astray by bad customs, by pleasures, by the cares of the world, and other causes, that the same Christ, in addition to this his inward striving with him, should afford him outward help, accommodated to his outward senses, by which his thoughts might be oftener turned towards God, and his soul be the better preserved in the way of salvation.  Christ accordingly, through Moses and the Prophets, became the author of a dispensation to the Jews, that is, of their laws, types, and customs, of their prophecies, and of their scriptures.

But as in the education of man things must be gradually unfolded, so it pleased God, in the scheme of his redemption, that the same Christ, in fullness of time, should take flesh, and become personally upon earth the author of another outward, but of a more pure and glorious dispensation, than the former, which was to be more extensive also; and which was not to be confined to the Jews, but to extend in time to the uttermost corners of the earth. Christ therefore became the Author of the inspired delivery of the outward scriptures of the New Testament. By these, as by outward and secondary means, he acted upon men’s senses. He informed them of their corrupt nature, of their awful and perilous situation, of another life, of a day of judgment, of rewards and punishments. These scriptures therefore, of which Christ was the Author, were outward instruments at the time, and continue so to posterity, to second his inward aid. That is, they produce thought, give birth to anxiety, excite fear, promote seriousness, turn the eye towards God, and thus prepare the heart for a sense of those inward strivings of Christ, which produce inward redemption from the power and guilt of sin.

Where, however, this outward aid of the Holy Scriptures has not reached, Christ continues to purify and redeem by his inward power. But as men, who are acted upon solely by his inward strivings, have not the same advantages as those who are also acted upon by his outward word, so less is expected in the one than in the other case. Less is expected from the Gentile than from the Jew: less from the Barbarian than from the Christian.

And this latter doctrine of the universality of the striving of Christ with man, in a spiritually instructive and redemptive capacity, as it is merciful and just, so it is worthy of the wise and beneficent Creator.  Christ, in short, has been filling, from the foundation of the world, the office of an inward redeemer, and this, without any exception, to all of the human race. And there is even “now no salvation in any other. For there is no other name under Heaven given among men, whereby we must be saved.”

From this new statement of the proposition, which statement is consistent with the language of divines, it will appear, that, if the Quakers have made every thing of the spirit, and but little of Christ, I have made, to suit the objectors, every thing of Christ, and but little of the spirit. Now I would ask, where lies the difference between the two statements? Which is the more accurate; or whether, when I say these things were done by the spirit, and when I say they were done by Christ, I do not state precisely the same proposition, or express the same thing?

That Christ, in all the offices stated by the proposition, is neither more nor less than the spirit of God, there can surely be no doubt. In looking at Christ, we are generally apt to view him with carnal eyes. We can seldom divest ourselves of the idea of a body belonging to him, though this was confessedly human, and can seldom consider him as a pure principle or fountain of divine life and light to men. And yet it is obvious, that we must view him in this light in the present case; for if he was at the creation of the world, or with Moses at the delivery of the law, (which the proposition supposes) he could not have been there in his carnal body; because this was not produced till centuries afterwards by the virgin Mary. In this abstracted light, the Apostles frequently view Christ themselves. Thus St. Paul: “I live, yet not I, but Christ liveth in me.” And again, “Know ye not your own selves, how that Jesus Christ is in you, except ye be reprobates?”

Now no person imagines that St. Paul had any idea, either that the body of Christ was in himself, or in others, on the occasions on which he has thus spoken.

That Christ therefore, as he held the offices contained in the proposition, was the spirit of God, we may pronounce from various views, which we may take of him, all of which seem to lead us to the same conclusion.

And first let us look at Christ in the scriptural light in which he has been held forth to us in the fourth section of the seventh chapter, where I have explained the particular notions of the Quakers relative to the new birth.

God maybe considered here as having produced, by means of his Holy Spirit, a birth of divine life in the soul of the “body which had been prepared;” and this birth was Christ.  “But that which is born of the spirit, says St. John, is spirit.” The only question then will be as to the magnitude of the spirit thus produced. In answer to this St. John says, “that God gave him not the spirit by measure.” And St. Paul says the same thing: “For in him all the fullness of the godhead dwelt bodily.” Now we can have no idea of a spirit without measure, or containing the fullness of the godhead, but the spirit of God.

But if these views of Christ should not be deemed satisfactory, we will contemplate him as St. John the Evangelist has held him forth to our notice. Moses says, that the spirit of God created the world. But St.  John says that the word created it. The spirit therefore and the word must be the same. But this word he tells us afterwards, and this positively, was Jesus Christ.

It appears therefore from these observations, that it makes no material difference, whether we use the words “Spirit of God” or “Christ,” in the proposition that has been before us, or that there will be no difference in the meaning of the proposition, either in the one or the other case; and also if the Quakers only allow, when the spirit took flesh, that the body was given as a sacrifice for sin, or that part of the redemption of man, as far as his sins are forgiven, is effected by this sacrifice, there will be little or no difference between the religion of the Quakers and that of the objectors, as far as it relates to Christ.