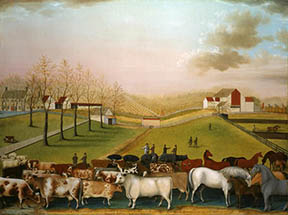 Occupations of the Quakers—Agriculture declining among them—Probable reasons of this decline—Country congenial to the quietude of mind required by their religion—Sentiments of Cowper—Congenial also to the improvement of their moral feelings—Sentiments of William Penn—Particularly suited to them as lovers of the animal creation.

The Quakers generally bring up their children to some employment. They believe that these, by having an occupation, may avoid evils, into which they might otherwise fall, if they had upon their hands an undue proportion of vacant time. “Friends of all degrees, says the book of extracts, are advised to take due care to breed up their children in some useful and necessary employment, that they may not spend their precious time in idleness, which is of evil example, and tends much to their hurt.”

The Quakers have been described to be a domestic people, and as peculiarly cherishing domestic happiness. Upon this principle it is, combined with the ties of their discipline and peculiar customs, that we scarcely find any of this society quitting their country, except for America, to reside in foreign parts. If it be a charge against the Quakers, that they are eager in the pursuit of wealth, let it at least be mentioned in their favour, that, in their accumulation of it, they have been careful not to suffer their knowledge to take advantage of the ignorance of others, and to keep their hands clear of the oppression, and of the blood of their fellow-creatures.

In looking among the occupations of the Quakers, we shall find some, who are brought up as manufacturers and mechanics; but the number of these is small.

Others, but these are few, follow the sea. There may be here and there a mate or captain in the coasting employ. In America, where they have great local and other advantages, there may be more in the seafaring line. But, in general, the Quakers are domestic characters, and prefer home.

There are but few also, who follow the professions. Their education and their religion exclude them from some of these. Some, however, are to be found in the department of medicine: and others, as conveyancers, in the law.

Several of the Quakers follow agriculture. But these are few, compared with the rest of the society, or compared with the number of those who formerly followed a rural life. Almost all the Quakers were originally in the country, and but few of them in the towns. But this order of things is reversing fast. They are flocking into the towns, and are abandoning agricultural pursuits.

The reasons, which may be given for this change, may be the following.  It is not at all unlikely but that tithes may have had some influence in producing it. I am aware, however, it will be said, that a Quaker, living in the country, and strongly principled against these, would think it a dereliction of his duty to leave it on this account, and would remain upon the principle, that an abode there, under the annual exercise of his testimony, would, in a religions point of view, add strength to his strength. But it must be observed; on the other hand, that where men are not obliged to remain under grievous evils, and can get rid of them, merely by changing their occupation in life, and this honourably, it is in human nature to do it. And so far tithes, I believe, have had an influence, in driving the Quakers into the towns.  Of later years, as the society has grown thinner in the country, I believe new reasons have sprung up; for the Quakers have had less opportunity of society with one another. They have been subjected, also to greater inconvenience in attending their religious meetings. Their children also have been more exposed to improper connexions in marriage.  To which it may be added, that the large and rapid profits frequently made in trade, compared with the generally small and slow returns from agricultural concerns, may probably have operated with many, as an inducement to such a change.

But whatever reasons may have induced them to quit the country, and to settle in the towns, no temporal advantages can make up to them, as a society, the measure of their loss. For when we consider that the Quakers never partake of the amusements of the world; that their worldly pleasures are chiefly of a domestic nature; that calmness, and quietude, and abstraction from worldly thoughts, to which rural retirement is peculiarly favourable, is the state of mind which they themselves acknowledge to be required by their religion, it would seem that the country was peculiarly the place for their habitations.

It would seem, also as if, by this forsaking of the country, they had deprived themselves of many opportunities of the highest enjoyment of which they are capable as Quakers. The objects in the country are peculiarly favourable to the improvement of morality in the exercise of the spiritual feelings. The bud and the blossom, the rising and the falling leaf, the blade of corn and the ear, the seed time and the harvest, the sun that warms and ripens, the cloud that cools and emits the fruitful shower; these, and an hundred objects, afford daily food for the religious growth of the mind. Even the natural man is pleased with these. They excite in him natural ideas, and produce in him a natural kind of pleasure. But the spiritual man experiences a sublimer joy. He sees none of these without feeling both spiritual improvement and delight. It is here that he converses with the Deity in his works:

It is here that he finds himself grateful for his goodness—that he acknowledges his wisdom—that he expresses his admiration of his power.

The poet Cowper, in his contemplation of a country life, speaks forcibly on this subject.

“O friendly to the best pursuits of man,
Friendly to thought, to virtue, and to peace,
Domestic life, in rural leisure pass’d!
Few know thy value, and few taste thy sweets;
Though many boast thy favours, and affect
To understand and choose these for their own
But foolish man forgoes his proper bliss,
Ev’n as his first progenitor, and quits,
Though plac’d in Paradise, (for earth has still
Some traces of her youthful beauty left,)
Substantial happiness for transient joy.
Scenes form’d for contemplation, and to nurse
The growing seeds of wisdom, that suggest
By every pleasing image they present,
Reflections, such as meliorate the heart,
Compose the passions, and exalt the mind.”

William Penn, in the beautiful letter which he left his wife and children before his first voyage to America, speaks also in strong terms upon the point in question.

“But agriculture, says he, is especially in my eye. Let my children be husbandmen and housewives. This occupation is industrious, healthy, honest, and of good example. Like Abraham and the holy ancients, who pleased God, and obtained a good report, this leads to consider the works of God, and nature of things that are good, and diverts the mind from being taken up with the vain arts and inventions of a luxurious world.” And a little farther on he says, “Of cities and towns, of concourse beware. The world is apt to stick close to those, who have lived and got wealth there. A country life and estate, I like best for my children. I prefer a decent mansion of a hundred pounds a year, to ten thousand pounds in London, or such like place, in the way of trade.”

To these observations it may he added, that the country, independently of the opportunity it affords for calmness and quietude of mind, and the moral improvement of it in the exercise of the spiritual feelings, is peculiarly fitted for the habitation of the Quakers, on account of their peculiar love for the animal creation. It would afford them a wide range for the exercise of this love, and the improvement of the benevolent affections. For tenderness, if encouraged, like a plant that is duly watered, still grows. What man has ever shown a proper affection for the brute creation, who has been backward in his love of the human race?