Praying for the Dead 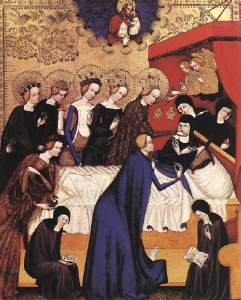 "It is therefore a holy and wholesome thought to pray for the dead, that they may be loosed from their sins" (2 Mach. xii. 46).

NO ONE will deny that the practice of praying for the dead is reasonable, if the dead are benefited by our prayers. That our prayers are beneficial to the departed we will endeavor to show. We are taught by revelation that besides heaven and hell, a state of everlasting pleasure and a state of eternal pain, there also exists a middle state of punishment for those who die in venial sin, or who have not sufficiently satisfied the justice of God for mortal sins already forgiven.

The people of God in the Old Law believed, and Jesus Christ and His apostles in the New Law taught, the existence of this middle state. In the Second Book of Machabees, quoted above, we read that the pious general Judas Machabeus having made a collection, "sent twelve thousand drachmas of silver to Jerusalem for sacrifices to be offered for the dead [soldiers], thinking well and religiously concerning the resurrection [for if he had not hoped that they that were slain should rise again, it would have seemed superfluous and vain to pray for the dead], and because he considered that they who had fallen asleep with godliness had great grace laid up for them. It is, therefore, a holy and wholesome thought to pray for the dead that they may be loosed from their sins." If prayers were not beneficial to the dead, God would not have sanctioned them.

This is exactly the practice of the Catholic Church. We pray and offer sacrifices for the souls in purgatory, just as Judas Machabeus did. Even if the Books of Machabees were not inspired, it is historically true that the Jews and almost all nations of antiquity believed in the existence of purgatory and the utility of prayers for the souls detained there. This universal consent is the voice of nature and of God. Hence we see that the practice of praying for the dead is reasonable.

This practice is in accordance with the teaching of Christ. In the 12th chapter, 32d verse, of St. Matthew, He says: "He that shall speak against the Holy Ghost, it shall not be forgiven him, neither in this world nor in the world to come."

These words teach us that some sins will be pardoned in the life to come. They can not be pardoned in heaven, since nothing defiled can enter heaven; nor can they be pardoned in hell, out of which there is no redemption, for "their worm shall not die, and their fire shall not be quenched." Therefore, there must be a state in the next world where sins will be forgiven, and we call that place or state purgatory. And the existence of purgatory implies the necessity of praying for those detained there. The belief in the existence of purgatory and the practice of praying for the faithful departed have existed in the Church from the time of its foundation.

Tertullian, who lived in the second century, considered it a solemn duty, whose obligation came down from the apostles, to offer sacrifices and prayers for the faithful departed. St. Augustine says: "The whole Church received from the tradition of the Fathers to pray for those who died in the communion of the body and blood of Christ." The dying request of St. Monica, the mother of St. Augustine, is well known. "I request you," she said, "that wherever you may be, you will remember me at the altar of the Lord." And he assures us that he frequently and fervently prayed for her soul.

The teaching of the Church of every age confirms the teaching of the Old and New Testament regarding purgatory and praying for the dead. To one who believes in heaven and hell, a place of eternal pleasure and of eternal punishment, the doctrine of purgatory must appear as a necessity, and the practice of praying for the dead reasonable. For it is certain that nothing defiled can enter heaven. But it is possible that many die guilty of but slight sins. Therefore, it must be said that these are damned, which is impious and absurd; that what is defiled can enter heaven, which is unscriptural; or that there is a purgatory, a state in which such souls are made pure as the driven snow, so that they can enter into the presence of their Maker. For an infinitely just God can not condemn to the same eternal punishment the child who dies guilty of a slight fault and the hardened murderer. No. He will render to every one according to his works.

The doctrine of purgatory, then, is reasonable as well as scriptural and traditional. Reasonable, too, is the practice of praying for the dead, for they are still members of the Church. All the members of the Church, consisting of the church militant on earth, the church triumphant in heaven, and the church suffering in purgatory, are one family bound together by the bond of charity. The members of the Church on earth pray to those in heaven, who love us and pray for us; and we pray for those in purgatory. They are God's friends deprived of heaven for a time. As those in heaven rejoice when one sinner does penance, so those in purgatory hear us, see us, love us, and are helped by our prayers. We love them and never cease to pray for them and offer the Holy Sacrifice for them. Even the unbeliever will stand or kneel by the remains of his departed friend and offer a prayer for him, thus showing that praying for the dead is reasonable and the natural dictate of the human heart.