Zen and the Samurai 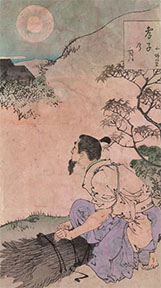 Buddhism is geographically divided into two schools -- the Southern, the older and simpler, and the Northern, the later and more developed faith.  The former, based mainly on the Pali texts is known as Hinayana (small vehicle), or the inferior doctrine; while the latter, based on the various Sanskrit texts, is known as Mahayana (large vehicle), or superior doctrine.  The chief tenets of the Southern School are so well known to occidental scholars that they almost always mean the Southern School by the word Buddhism.  But with regard to the Northern School very little is known to the West, owing to the fact that most of its original texts were lost, and that the teachings based on these texts are written in Chinese, or Tibetan, or Japanese languages unfamiliar to non-Buddhist investigators.

It is hardly justifiable to cover the whole system of Buddhism with a single epithet 'pessimistic' or 'nihilistic,' because Buddhism, having been adopted by savage tribes as well as civilized nations, by quiet, enervated people as well as by warlike, sturdy hordes, during some twenty-five hundred years, has developed itself into beliefs widely divergent and even diametrically opposed.  Even in Japan alone it has differentiated itself into thirteen main sects and forty-four sub-sects and is still in full vigor, though in other countries it has already passed its prime.  Thus Japan seems to be the best representative of the Buddhist countries where the majority of people abides by the guiding principle of the Northern School.  To study her religion, therefore, is to penetrate into Mahayanism, which still lies an unexplored land for the Western minds.  And to investigate her faith is not to dig out the remains of Buddhist faith that existed twenty centuries ago, but to touch the heart and soul of Mahayanism that enlivens its devotees at the present moment.

The object of this work is to show how the Mahayanistic view of life and of the world differs markedly from that of Hinayanism, which is generally taken as Buddhism by occidentals, to explain how the religion of Buddha has adapted itself to its environment in the Far East, and also to throw light on the existing state of the spiritual life of modern Japan.

For this purpose we have singled out of thirteen Japanese sects the Zen Sect,  not only because of the great influence it has exercised on the nation, but because of the unique position it holds among the established religious systems of the world.  In the first place, it is as old as Buddhism itself, or even older, for its mode of practicing Meditation has been handed down without much alteration from pre-Buddhist recluses of India; and it may, on that account, provide the student of comparative religion with an interesting subject for his research.

In the second place, in spite of its historical antiquity, ideas entertained by its advocates are so new that they are in harmony with those of the New Buddhists; accordingly the statement of these ideas may serve as an explanation of the present movement conducted by young and able reformers of Japanese Buddhism.

Thirdly, Buddhist denominations, like non-Buddhist religions, lay stress on scriptural authority; but Zen denounces it on the ground that words or characters can never adequately express religious truth, which can only be realized by mind; consequently it claims that the religious truth attained by Shakya Muni in his Enlightenment has been handed down neither by word of mouth nor by the letters of scriptures, but from teacher's mind to disciple's through the line of transmission until the present day.  It is an isolated instance in the whole history of the world's religions that holy scriptures are declared to be 'no more than waste paper' by religionists, as done by Zen masters.

Fourthly, Buddhist as well as non-Buddhist religions regard, without exception, their founders as superhuman beings, but the practitioners of Zen hold the Buddha as their predecessor, whose spiritual level they confidently aim to attain.  Furthermore, they liken one who remains in the exalted position of Buddhaship to a man bound by a gold chain, and pity his state of bondage.  Some of them went even so far as to declare Buddhas and Bodhisattvas to be their servants and slaves.  Such an attitude of religionists can hardly be found in any other religion.

Fifthly, although non-Buddhist people are used to call Buddhism idolatry, yet Zen can never be called so in the accepted sense of the term, because it, having a grand conception of Deity, is far from being a form of idol-worship; nay, it sometimes even took an iconoclastic attitude as is exemplified by Tan Hia, who
warmed himself on a cold morning by making a fire of wooden statues.  Therefore our exposition on this point will show the real state of existing Buddhism, and serve to remove religious prejudices entertained against it.

Sixthly, there is another characteristic of Zen, which cannot be found in any other religion-that is to say, its peculiar mode of expressing profound religious insight by such actions as the lifting up of a hair-brush, or by the tapping of the chair with a staff, or by a loud outcry, and so forth.  This will give the student of
religion a striking illustration of differentiated forms of religion in its scale of evolution.

Besides these characteristics, Zen is noted for its physical and mental training.  That the daily practice of Zazen and the breathing exercise remarkably improves one's physical condition is an established fact.  And history proves that most Zen masters enjoyed a long life in spite of their extremely simple mode of living.  Its mental discipline, however, is by far more fruitful, and keeps one's mind in equipoise, making one neither passionate nor dispassionate, neither sentimental nor unintelligent, neither nervous nor senseless.  It is well known as a cure to all sorts of mental disease, occasioned by nervous disturbance, as a nourishment to the fatigued brain, and also as a stimulus to torpor and sloth.  It is self-control, as it is the subduing of such pernicious passions as anger, jealousy, hatred, and the like, and the awakening of noble emotions such as sympathy, mercy, generosity, and what not.  It is a mode of Enlightenment, as it is the dispelling of illusion and of doubt, and at the same time it is the overcoming of egoism, the destroying of mean desires, the uplifting of the moral ideal, and the disclosing of inborn wisdom.

The historical importance of Zen can hardly be exaggerated.  After its introduction into China in the sixth century, A.D., it grew ascendant through the Sui (598-617) and the Tang dynasty (618-906), and enjoyed greater popularity than any other sect of Buddhism during the whole period of the Sung (976-1126) and the Southern Sung dynasty (1127-1367).  In these times its commanding influence became so irresistible that Confucianism, assimilating the Buddhist teachings, especially those of Zen, into itself and changing its entire aspect, brought forth the so-called Speculative philosophy.  And in the Ming dynasty (1368-1659) the principal doctrines of Zen were adopted by a celebrated Confucian scholar, Wang Yang Ming, who thereby founded a school, through which Zen exercised profound influence on Chinese and Japanese men of letters, statesmen, and soldiers.

As regards Japan, it was first introduced into the island as the faith first for the Samurai or the military class, and molded the characters of many distinguished soldiers whose lives adorn the pages of her history.  Afterwards it gradually found its way to palaces as well as to cottages through literature and art, and at last permeated through every fiber of the national life.  It is Zen that modern Japan, especially after the Russo-Japanese War, has acknowledged as an ideal doctrine for her rising generation.

Resemblance of the Zen Monk to the Samurai