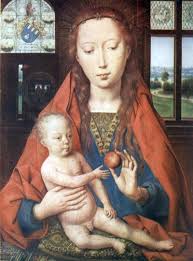 "From henceforth all generations shall call me blessed" (Luke i. 48).

THESE words from St. Luke show that the Catholic practice of honoring Mary is scriptural. We alone fulfil the prophecy, "From henceforth all generations shall call me blessed." If Mary was so pure that the archangel Gabriel could salute her as full of grace; if she was so perfect as to be honored, respected, and loved by her divine Son, Jesus Christ, is it not reasonable that we, too, should honor, respect, and love her?

How we honor the sword of Washington! What a cluster of tender recollections clings to the staff of Franklin! Is there a loyal American citizen who does not think with feelings of love and respect of the mother of our Revolutionary hero, or who would not doff his hat at the unveiling of a statue of the sage of Monticello? And why? Is it on account of their intrinsic merit? No. We honor them principally on account of the relation they bear to those three brightest stars in the American firmament. So it is with the honor we show to Mary, the Mother of God. Although she was an example of all virtues, we honor her principally because it was through her instrumentality He was born by whom we achieved not civil liberty, but the liberty of the children of God. She did not draw lightning from heaven, nor the scepter from kings; but she brought forth Him who is the Lord of heaven and King of kings.

The principal reason, then, why we honor Mary is because she is the Mother of Our Lord and Saviour Jesus Christ. This honor consists of love, respect, and veneration. We love her with an interior love, a love proceeding from the heart; nor should we fear to let this love appear outwardly. When others revile her, speak disrespectfully of her, we should shrink from the very idea of acting similarly toward her. We should then remember that she is the Mother of Our Saviour, and should ask ourselves how we would have acted toward her had we lived in her day and been witnesses of the honor shown her by her divine Son. By so doing we will show her that love which is her due. Our respect, our veneration for her, should be affectionate and deep. When we remember that it was her hand that first lifted from the ground and received in maternal embrace the sacred body of Jesus, just born and just dead; when we think how respectfully Elizabeth greeted her; when we recall to mind the reverent salutation of the archangel; when we consider the honor shown her by the apostles and by her own divine Son, can we help feeling a deep love, respect, and veneration for her? You see, dear reader, honoring Mary is scriptural and reasonable.

But if we should honor her principally because she is the Mother of God, we should also honor her because she is the peerless glory, the matchless jewel of her sex. She constitutes a sole exception to a general law. Sin never contaminated, never touched her fair soul. This is what we mean by the Immaculate Conception.

God created the first man free from sin. But he transgressed the law of God, and, by his transgression, all his posterity are born in sin and conceived in iniquity. For St. Paul says: "By one man sin entered into this world, and by sin death; and so death passed upon all men, in whom all have sinned" (Rom. v. 12). But God promised that the woman, Mary, should crush the head of the serpent. Now if she was to crush the head of the serpent, it was fit that she should never be under his power, that she should be pure, free from sin of every kind.

There have been exceptions to all general laws. At the time of the deluge Noe was saved. Lot was saved from the destruction of Sodom. In like manner, the Blessed Virgin is an exception to the general law that all sinned in Adam. Isaias and St. John Baptist were sanctified in their mother's womb. Was it any more difficult for God to sanctify Mary at the moment of her conception, at the moment of the union of her soul with her body? God chose His own Mother. If He had the power to choose her did He not also have the power to preserve her from original sin? And does it not appear to you most fitting that God, the Holy Ghost, should preserve His spouse, and God, the Son, His Mother, from sin of every kind?

"Hail, full of grace," the angel said to her. If she was full of grace, no vacancy was left for sin. Grace denotes the absence of sin, as light denotes the absence of darkness. Hence if Mary was full of grace, she was never subject to sin; she was always pure and her conception immaculate. It is but natural, then, that we arrive at the belief in the Immaculate Conception, at the belief in the sinlessness, the spotlessness of the Blessed Virgin from the very beginning of her existence. If we honor Mary principally because the angel honored her, because God honored her, we honor her, also, because of her immaculate conception and total freedom from sin. She was a model of all virtues. Is it not reasonable, then, to honor Mary, to love her, and to believe that she loves us? If we honor the good and virtuous, where can we find a nobler example of virtue than Mary? What a beautiful model Mary is for Christians, and especially for Christian women! Good Catholic mothers are continually urging upon their daughters the necessity of choosing as a model Mary, the true type of female excellence. In Mary you find all that is tender, loving, constant, and true. In her you find all virtues. In her humility she refused the highest honors; while in patience she endured more anguish and agony than any other creature on earth.

Mary is a creature of God. As the praise we bestow on a beautiful picture redounds to the glory of the artist, so the honor we give Mary redounds to God, since we honor her for His sake. Let us honor her. That person who honors the Blessed Virgin; who loves, respects, and venerates her as the Mother of God; who takes her as a model and imitates her virtues; who prays to her in trials and afflictions and asks her intercession with her divine Son, does not only act in a reasonable manner, but such action is certain to make the path through this world smooth and easy and at the same time safe to a life of eternal happiness.