Honor of the Samurai 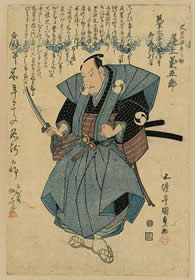 The sense of honor, implying a vivid consciousness of personal dignity and worth, could not fail to characterize the samurai, born and bred to value the duties and privileges of their profession. Though the word ordinarily given in current times as the translation of Honor was not used freely, yet the idea was conveyed by such terms as na (name) men-moku (countenance), guai-bun (outside hearing), reminding us respectively of the biblical use of "name," of the evolution of the term "personality" from the Greek mask, and of "fame." A good name—one's reputation, the immortal part of one's self, what remains being bestial—assumed as a matter of course, any infringement upon its integrity was felt as shame, and the sense of shame (Ren-chi-shin) was one of the earliest to be cherished in juvenile education. "You will be laughed at," "It will disgrace you," "Are you not ashamed?" were the last appeal to correct behavior on the part of a youthful delinquent. Such a recourse to his honor touched the most sensitive spot in the child's heart, as though it had been nursed on honor while it was in its mother's womb; for most truly is honor a prenatal influence, being closely bound up with strong family consciousness. "In losing the solidarity of families," says Balzac, "society has lost the fundamental force which Montesquieu named Honor." Indeed, the sense of shame seems to me to be the earliest indication of the moral consciousness of our race. The first and worst punishment which befell humanity in consequence of tasting "the fruit of that forbidden tree" was, to my mind, not the sorrow of childbirth, nor the thorns and thistles, but the awakening of the sense of shame. Few incidents in history excel in pathos the scene of the first mother plying with heaving breast and tremulous fingers, her crude needle on the few fig leaves which her dejected husband plucked for her. This first fruit of disobedience clings to us with a tenacity that nothing else does. All the sartorial ingenuity of mankind has not yet succeeded in sewing an apron that will efficaciously hide our sense of shame. That samurai was right who refused to compromise his character by a slight humiliation in his youth; "because," he said, "dishonor is like a scar on a tree, which time, instead of effacing, only helps to enlarge."

Mencius had taught centuries before, in almost the identical phrase, what Carlyle has latterly expressed,—namely, that "Shame is the soil of all Virtue, of good manners and good morals."

The fear of disgrace was so great that if our literature lacks such eloquence as Shakespeare puts into the mouth of Norfolk, it nevertheless hung like Damocles' sword over the head of every samurai and often assumed a morbid character. In the name of Honor, deeds were perpetrated which can find no justification in the code of Bushido. At the slightest, nay, imaginary insult, the quick-tempered braggart took offense, resorted to the use of the sword, and many an unnecessary strife was raised and many an innocent life lost. The story of a well-meaning citizen who called the attention of a bushi to a flea jumping on his back, and who was forthwith cut in two, for the simple and questionable reason that inasmuch as fleas are parasites which feed on animals, it was an unpardonable insult to identify a noble warrior with a beast—I say, stories like these are too frivolous to believe. Yet, the circulation of such stories implies three things; (1) that they were invented to overawe common people; (2) that abuses were really made of the samurai's profession of honor; and (3) that a very strong sense of shame was developed among them. It is plainly unfair to take an abnormal case to cast blame upon the Precepts, any more than to judge of the true teaching of Christ from the fruits of religious fanaticism and extravagance—inquisitions and hypocrisy. But, as in religious monomania there is something touchingly noble, as compared with the delirium tremens of a drunkard, so in that extreme sensitiveness of the samurai about their honor do we not recognize the substratum of a genuine virtue?

The morbid excess into which the delicate code of honor was inclined to run was strongly counterbalanced by preaching magnanimity and patience. To take offense at slight provocation was ridiculed as "short-tempered." The popular adage said: "To bear what you think you cannot bear is really to bear." The great Iyéyasu left to posterity a few maxims, among which are the following::

"The life of man is like going a long distance with a heavy load upon the shoulders. Haste not."

"Reproach none, but be forever watchful of thine own short-comings."

"Forbearance is the basis of length of days."

He proved in his life what he preached. A literary wit put a characteristic epigram into the mouths of three well-known personages in our history: to Nobunaga he attributed, "I will kill her, if the nightingale sings not in time;" to Hidéyoshi, "I will force her to sing for me;" and to Iyéyasu, "I will wait till she opens her lips."

Patience and long suffering were also highly commended by Mencius. In one place he writes to this effect: "Though you denude yourself and insult me, what is that to me? You cannot defile my soul by your outrage." Elsewhere he teaches that anger at a petty offense is unworthy a superior man, but indignation for a great cause is righteous wrath.

To what height of unmartial and unresisting meekness Bushido could reach in some of its votaries, may be seen in their utterances. Take, for instance, this saying of Ogawa: "When others speak all manner of evil things against thee, return not evil for evil, but rather reflect that thou wast not more faithful in the discharge of thy duties." Take another of Kumazawa:—"When others blame thee, blame them not; when others are angry at thee, return not anger. Joy cometh only as Passion and Desire part." Still another instance I may cite from Saigo, upon whose overhanging brows "shame is ashamed to sit;"—"The Way is the way of Heaven and Earth: Man's place is to follow it: therefore make it the object of thy life to reverence Heaven. Heaven loves me and others with equal love; therefore with the love wherewith thou lovest thyself, love others. Make not Man thy partner but Heaven, and making Heaven thy partner do thy best. Never condemn others; but see to it that thou comest not short of thine own mark." Some of those sayings remind us of Christian expostulations and show us how far in practical morality natural religion can approach the revealed. Not only did these sayings remain as utterances, but they were really embodied in acts.

It must be admitted that very few attained this sublime height of magnanimity, patience and forgiveness. It was a great pity that nothing clear and general was expressed as to what constitutes Honor, only a few enlightened minds being aware that it "from no condition rises," but that it lies in each acting well his part: for nothing was easier than for youths to forget in the heat of action what they had learned in Mencius in their calmer moments. Said this sage, "'Tis in every man's mind to love honor: but little doth he dream that what is truly honorable lies within himself and not anywhere else. The honor which men confer is not good honor. Those whom Châo the Great ennobles, he can make mean again."

For the most part, an insult was quickly resented and repaid by death, as we shall see later, while Honor—too often nothing higher than vain glory or worldly approbation—was prized as the summum bonum of earthly existence. Fame, and not wealth or knowledge, was the goal toward which youths had to strive. Many a lad swore within himself as he crossed the threshold of his paternal home, that he would not recross it until he had made a name in the world: and many an ambitious mother refused to see her sons again unless they could "return home," as the expression is, "caparisoned in brocade." To shun shame or win a name, samurai boys would submit to any privations and undergo severest ordeals of bodily or mental suffering. They knew that honor won in youth grows with age. In the memorable siege of Osaka, a young son of Iyéyasu, in spite of his earnest entreaties to be put in the vanguard, was placed at the rear of the army. When the castle fell, he was so chagrined and wept so bitterly that an old councillor tried to console him with all the resources at his command. "Take comfort, Sire," said he, "at thought of the long future before you. In the many years that you may live, there will come divers occasions to distinguish yourself." The boy fixed his indignant gaze upon the man and said—"How foolishly you talk! Can ever my fourteenth year come round again?"

Life itself was thought cheap if honor and fame could be attained therewith: hence, whenever a cause presented itself which was considered dearer than life, with utmost serenity and celerity was life laid down.

This is taken from Bushido, The Soul of Japan.