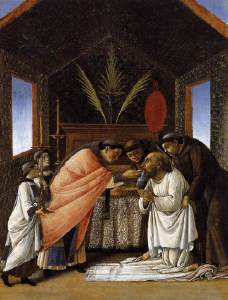 "He that eateth this bread shall live forever"
(John vi. 59)

HOLY communion is receiving the body and blood of Christ in the Blessed Sacrament. The clergy when saying Mass, except on Good Friday, receive under both forms. When not celebrating Mass, they receive only the one kind, the consecrated bread. In the early ages of the Church communion was given to the people under both forms.

Good Christians frequently receive their Lord and their God in holy communion. He inspires them with feelings of love, gratitude, and adoration. He reminds them to think frequently of their Creator—to give Him their first thoughts in the morning and their last in the evening. He gives them strength to restrain their guilty passions.

Holy Communion is the seed of immortality. "He that eateth this bread shall live forever."