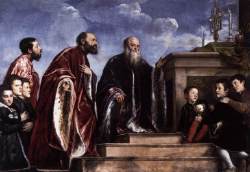 OF THE many practices of the Church, few have been the cause of more controversy than that of granting indulgences. Though not the cause, the granting of an indulgence furnished a pretext for Luther's apostasy. Leo X, who was Pope at that time, desiring to complete St. Peter's at Rome, appealed to all Catholics for financial aid. There was certainly nothing wrong in this. With these alms it was intended that the most magnificent Christian temple in the world would be completed.

"Majesty, Power, Glory, Strength, and Beauty, all are aisled
In this eternal ark of worship undefiled."

All who contributed toward the completion of St. Peter's and complied with the necessary conditions were granted an indulgence.

The alms were not one of the indispensable conditions. Those conditions were a sincere repentance and confession. Hence, those who did not contribute could gain the indulgence. Perhaps the Dominican Tetzel, who was chosen to announce the indulgence, exceeded his powers and made them serve his own ends.

His action in the affair was not approved by Rome. If it is certain that the Pope did nothing wrong in asking for aid to build that beautiful monument to religion, it is equally certain that he did nothing wrong, that he did not exceed the limits of his powers when he granted the indulgence. In order to understand this, we must have a clear idea of what is meant by an indulgence.

Neither is an indulgence a license, a permission to commit sin. No one, not even God Himself, could give permission to commit sin. For God is all good, and although all powerful He can not sanction that which is evil in itself. It would be contrary to His very nature. An indulgence, then, is not what it has been painted. Having seen what an indulgence is not, let us see what it is. It is a remission of the whole or a part of the debt of temporal punishment due to sin after the guilt and eternal punishment have been forgiven in the sacrament of Penance.

In the early ages of the Church notorious sinners, after being absolved, were sentenced to long public penances. By sincere sorrow, an indulgence or remission of some of the time was granted them. Public confession and public penances have passed away. These public penances are replaced by pious devotions. Upon the performance of certain pious devotions the Church at times grants an indulgence; that is, a remission of such temporal punishment as is equivalent to the canonical penances corresponding to the sins committed.

In a similar manner we have a twofold punishment attached to crime in this world. A man commits a crime. He is sentenced to a term in the penitentiary. After spending his time of punishment he comes back to society, but finds he has another punishment to undergo in being avoided by his friends and others.

The practice of granting indulgences was founded on many passages of Scripture, both of the Old and New Testament. In the 12th chapter of the book of Numbers we learn that Mary, the sister of Moses, was forgiven a sin which she had committed. But God inflicted upon her the penalty of leprosy. This was a temporal punishment. By the prayer of Moses an indulgence was granted; for God took away the temporal punishment.

Our divine Lord left with His Church the power of granting indulgences, as we learn from His words taken from St. Matthew: "Whatsoever you shall loose upon earth shall be loosed also in heaven." This promise implies the power of loosing not only from sin and its eternal punishment, but also the power of releasing the bond of temporal punishment, of freeing from everything that would prevent the soul from entering the kingdom of heaven. St. Paul granted an indulgence to the incestuous Corinthian, as we learn from the 2d chapter of his Second Epistle to the Corinthians. By the power and authority which he received from Christ, he granted the Corinthian pardon from performing a certain penance. This penance was a temporal punishment. The apostle took away the temporal punishment. That is an indulgence.

Non-Catholics grant a kind of plenary indulgence to every one by saying that works of penance are unnecessary. The practice of the Catholic Church of granting an indulgence only to the deserving is certainly more conformable to Scripture as well as more reasonable.

Experience teaches us the utility of indulgences. They encourage the faithful to frequent the sacraments, to repent, to do acts of penance, and perform works of piety, charity, and devotion.

A practice productive of such beneficial results is reasonable; it is also reasonable because it is sanctioned by Scripture and the Church of every age. For God would not sanction it nor could the Church practise it if it were not conformable to reason.