The Future of Bushido 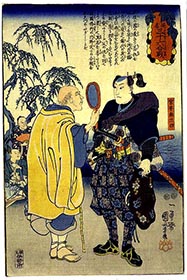 This is taken from Inazo Nitobe's Bushido, The Soul of Japan.]

Few historical comparisons can be more judiciously made than between the Chivalry of Europe and the Bushido of Japan, and, if history repeats itself, it certainly will do with the fate of the latter what it did with that of the former. The particular and local causes for the decay of Chivalry have, of course, little application to Japanese conditions; but the larger and more general causes that helped to undermine Knighthood and Chivalry in and after the Middle Ages in Europe are just as surely working for the decline of Bushido.

One remarkable difference between the experience of Europe and of Japan is, that, whereas in Europe when Chivalry was weaned from Feudalism and was adopted by the Church, it obtained a fresh lease of life, in Japan no religion was large enough to nourish it; hence, when the mother institution, Feudalism, was gone, Bushido, left an orphan, had to shift for itself. The present elaborate military organization might take it under its patronage, but we know that modern warfare can afford little room for its continuous growth. Shintoism, which fostered it in its infancy, is itself superannuated. The hoary sages of ancient China are being supplanted by the intellectual parvenu of the type of Bentham and Mill. Moral theories of a comfortable kind, flattering to the Chauvinistic tendencies of the time, and therefore thought well-adapted to the need of this day, have been invented and propounded; but as yet we hear only their shrill voices echoing through the columns of yellow journalism.

Principalities and powers are arrayed against the Precepts of Knighthood. Already, as Veblen says, "the decay of the ceremonial code—or, as it is otherwise called, the vulgarization of life—among the industrial classes proper, has become one of the chief enormities of latter-day civilization in the eyes of all persons of delicate sensibilities." The irresistible tide of triumphant democracy, which can tolerate no form or shape of trust—and Bushido was a trust organized by those who monopolized reserve capital of intellect and culture, fixing the grades and value of moral qualities—is alone powerful enough to engulf the remnant of Bushido. The present societal forces are antagonistic to petty class spirit, and Chivalry is, as Freeman severely criticizes, a class spirit. Modern society, if it pretends to any unity, cannot admit "purely personal obligations devised in the interests of an exclusive class." Add to this the progress of popular instruction, of industrial arts and habits, of wealth and city-life,—then we can easily see that neither the keenest cuts of samurai's sword nor the sharpest shafts shot from Bushido's boldest bows can aught avail. The state built upon the rock of Honor and fortified by the same—shall we call it the Ehrenstaat or, after the manner of Carlyle, the Heroarchy?—is fast falling into the hands of quibbling lawyers and gibbering politicians armed with logic-chopping engines of war. The words which a great thinker used in speaking of Theresa and Antigone may aptly be repeated of the samurai, that "the medium in which their ardent deeds took shape is forever gone."

Alas for knightly virtues! alas for samurai pride! Morality ushered into the world with the sound of bugles and drums, is destined to fade away as "the captains and the kings depart."

If history can teach us anything, the state built on martial virtues—be it a city like Sparta or an Empire like Rome—can never make on earth a "continuing city." Universal and natural as is the fighting instinct in man, fruitful as it has proved to be of noble sentiments and manly virtues, it does not comprehend the whole man. Beneath the instinct to fight there lurks a diviner instinct to love. We have seen that Shintoism, Mencius and Wan Yang Ming, have all clearly taught it; but Bushido and all other militant schools of ethics, engrossed, doubtless, with questions of immediate practical need, too often forgot duly to emphasize this fact. Life has grown larger in these latter times. Callings nobler and broader than a warrior's claim our attention to-day. With an enlarged view of life, with the growth of democracy, with better knowledge of other peoples and nations, the Confucian idea of Benevolence—dare I also add the Buddhist idea of Pity?—will expand into the Christian conception of Love. Men have become more than subjects, having grown to the estate of citizens: nay, they are more than citizens, being men.

Though war clouds hang heavy upon our horizon, we will believe that the wings of the angel of peace can disperse them. The history of the world confirms the prophecy the "the meek shall inherit the earth." A nation that sells its birthright of peace, and backslides from the front rank of Industrialism into the file of Filibusterism, makes a poor bargain indeed!

When the conditions of society are so changed that they have become not only adverse but hostile to Bushido, it is time for it to prepare for an honorable burial. It is just as difficult to point out when chivalry dies, as to determine the exact time of its inception. Dr. Miller says that Chivalry was formally abolished in the year 1559, when Henry II. of France was slain in a tournament. With us, the edict formally abolishing Feudalism in 1870 was the signal to toll the knell of Bushido. The edict, issued two years later, prohibiting the wearing of swords, rang out the old, "the unbought grace of life, the cheap defense of nations, the nurse of manly sentiment and heroic enterprise," it rang in the new age of "sophisters, economists, and calculators."

It has been said that Japan won her late war with China by means of Murata guns and Krupp cannon; it has been said the victory was the work of a modern school system; but these are less than half-truths. Does ever a piano, be it of the choicest workmanship of Ehrbar or Steinway, burst forth into the Rhapsodies of Liszt or the Sonatas of Beethoven, without a master's hand? Or, if guns win battles, why did not Louis Napoleon beat the Prussians with his Mitrailleuse, or the Spaniards with their Mausers the Filipinos, whose arms were no better than the old-fashioned Remingtons? Needless to repeat what has grown a trite saying that it is the spirit that quickeneth, without which the best of implements profiteth but little. The most improved guns and cannon do not shoot of their own accord; the most modern educational system does not make a coward a hero. No! What won the battles on the Yalu, in Korea and Manchuria, was the ghosts of our fathers, guiding our hands and beating in our hearts. They are not dead, those ghosts, the spirits of our warlike ancestors. To those who have eyes to see, they are clearly visible. Scratch a Japanese of the most advanced ideas, and he will show a samurai. The great inheritance of honor, of valor and of all martial virtues is, as Professor Cramb very fitly expresses it, "but ours on trust, the fief inalienable of the dead and of the generation to come," and the summons of the present is to guard this heritage, nor to bate one jot of the ancient spirit; the summons of the future will be so to widen its scope as to apply it in all walks and relations of life.

It has been predicted—and predictions have been corroborated by the events of the last half century—that the moral system of Feudal Japan, like its castles and its armories, will crumble into dust, and new ethics rise phoenix-like to lead New Japan in her path of progress. Desirable and probable as the fulfillment of such a prophecy is, we must not forget that a phoenix rises only from its own ashes, and that it is not a bird of passage, neither does it fly on pinions borrowed from other birds. "The Kingdom of God is within you." It does not come rolling down the mountains, however lofty; it does not come sailing across the seas, however broad. "God has granted," says the Koran, "to every people a prophet in its own tongue." The seeds of the Kingdom, as vouched for and apprehended by the Japanese mind, blossomed in Bushido. Now its days are closing—sad to say, before its full fruition—and we turn in every direction for other sources of sweetness and light, of strength and comfort, but among them there is as yet nothing found to take its place. The profit and loss philosophy of Utilitarians and Materialists finds favor among logic-choppers with half a soul. The only other ethical system which is powerful enough to cope with Utilitarianism and Materialism is Christianity, in comparison with which Bushido, it must be confessed, is like "a dimly burning wick" which the Messiah was proclaimed not to quench but to fan into a flame. Like His Hebrew precursors, the prophets—notably Isaiah, Jeremiah, Amos and Habakkuk—Bushido laid particular stress on the moral conduct of rulers and public men and of nations, whereas the Ethics of Christ, which deal almost solely with individuals and His personal followers, will find more and more practical application as individualism, in its capacity of a moral factor, grows in potency. The domineering, self-assertive, so-called master-morality of Nietzsche, itself akin in some respects to Bushido, is, if I am not greatly mistaken, a passing phase or temporary reaction against what he terms, by morbid distortion, the humble, self-denying slave-morality of the Nazarene.

Christianity and Materialism (including Utilitarianism)—or will the future reduce them to still more archaic forms of Hebraism and Hellenism?—will divide the world between them. Lesser systems of morals will ally themselves on either side for their preservation. On which side will Bushido enlist? Having no set dogma or formula to defend, it can afford to disappear as an entity; like the cherry blossom, it is willing to die at the first gust of the morning breeze. But a total extinction will never be its lot. Who can say that stoicism is dead? It is dead as a system; but it is alive as a virtue: its energy and vitality are still felt through many channels of life—in the philosophy of Western nations, in the jurisprudence of all the civilized world. Nay, wherever man struggles to raise himself above himself, wherever his spirit masters his flesh by his own exertions, there we see the immortal discipline of Zeno at work.

Bushido as an independent code of ethics may vanish, but its power will not perish from the earth; its schools of martial prowess or civic honor may be demolished, but its light and its glory will long survive their ruins. Like its symbolic flower, after it is blown to the four winds, it will still bless mankind with the perfume with which it will enrich life. Ages after, when its customaries shall have been buried and its very name forgotten, its odors will come floating in the air as from a far-off unseen hill, "the wayside gaze beyond;"—then in the beautiful language of the Quaker poet,

"The traveler owns the grateful sense
Of sweetness near - he knows not whence,
And, pausing, takes with forehead bare
The benediction of the air."