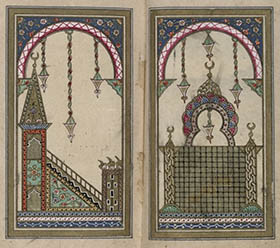 In the beginning of his career Fudhayl ben Ayaz was a highwayman, and used to pitch his tent on the plains between Merv and Abiwerd. He had collected many other robbers round him; when they brought in booty, he, as their chief, apportioned it. He never neglected saying the Friday prayers, and dismissed any of his servants whom he found neglecting them.

One day his men were lying in wait on the high road when a numerous caravan arrived and fell into their clutches. In this caravan was a merchant who had a large sum of money in his purse. Desirous of hiding it, he fled towards the open plain; there he found a tent and a man clothed in coarse garments seated in it. The merchant, having explained the matter to him, was told to leave his money there. He did so, and returned to the caravan. When he got there he saw that the robbers had attacked it and taken all the goods, after having bound and laid on the earth all the travellers. He ransomed them, and helped them to gather together the remains of their property. When he returned to the tent he found the robbers there dividing their booty. Seeing this, he said, "Woe is me! Then he whom I trusted my money to was a robber." He was on the point of departing when Fudhayl called out to him, "What is the matter?" "I had come," he answered, "to take back my money which I had deposited here." "Well," said Fudhayl, "you will find it where you placed it." The merchant did so. "But," cried Fudhayl's companions, "we did not find any coined money at all in this caravan; how is it that you hand over such a large sum?" "This man," answered Fudhayl, "has trusted me in the simplicity of his heart; now I, in the simplicity of my heart, trust in the Lord; and just as I have justified the good opinion which the merchant had of me, I hope the Lord will justify that which I have of Him."

The conversion of Fudhayl to an ascetic life took place in the following manner. As he was climbing over a wall to see a girl whom he loved, he heard a voice pronounce this verse of the Koran: "Is not the time yet come unto those who believe that their hearts should humbly submit to the admonition of God?" On this he exclaimed, "O Lord, that time is come." He then went away from the place, and the approach of night induced him to repair for shelter to a ruined edifice. A caravan was encamped not far off, and Fudhayl heard one of the travellers say to another, "We must rise and be going, lest Fudhayl should arrive and rob us." Fudhayl then came forward and said, "I have good news for you. Fudhayl has entered upon the path of penitence, and is more likely to flee from you than you from him." Then he departed, after having asked their pardon for his former misdeeds. For some time he resided at Mecca, where he received instruction from Abou Hanifeh, and subsequently returned to his own country, where his sanctity became widespread.

It is related that one night the Caliph Harun-al-Rashid said to Fazl the Barmecide, "Take me to a man by whose aid I may rise out of the moral torpor into which I have fallen." Fazl took him to the door of a celebrated ascetic, Sofyan ibn Oyaina, who asked on their knocking, "Who is there?" "The Prince of the Faithful," answered Fazl. "Why did you not send for me?" said Sofyan, "I would have come myself in person to serve him." Al-Rashid, hearing this, said, "This is not the man I seek." They then departed, and knocked at the door of Fudhayl. As they arrived, the latter was reciting the following verse of the Koran: "Do those who have done evil imagine that we shall set them on the same level with those who have done well?" Koran (Sura xlv., v. 20). The Caliph had no sooner heard this verse than he said, "If it is good advice we are seeking, here is enough for us." Then they knocked at the door. "Who is there?" asked Fudhayl. "The Prince of the Faithful," Fazl answered. "What do you want?" was the reply; "I have nothing to do with you, leave me alone and don't waste my time." "But you should treat the Caliph with honour, and let us in." "It is for you to come in if you must, in spite of me," answered Fudhayl. When the Caliph and his attendant entered, Fudhayl extinguished the lamp in order not to see the intruders. Harun-al-Rashid, having touched Fudhayl's hand in the dark, the latter exclaimed, "How soft this hand is; may it escape hell fire." Having thus spoken, he rose to pray. As for the Caliph, he began to weep, and said, "Speak to me at least one word." Fudhayl, when he had finished his prayers, said to him, "O Harun, thy ancestor Abbas, who was the paternal uncle of the Prophet (on whom be peace!) said to him one day, O Prophet of God, make me ruler over a nation. The Prophet replied, I have made thee ruler over thyself. If thou rulest thine own body and keepest it constant in the service of the Lord, that is better than ruling a nation for a thousand years. Again, Omar, the son of Abd al Aziz, being installed on the throne of the Caliphate, sent for three of his intimate friends, and said to them, 'Behold me caught in the toils of the Caliphate; how shall I get rid of them? Many people consider power a blessing; I regard it as a calamity.'"

Then Fudhayl added, "O Harun, if thou wishest to escape the punishment of the Day of Judgment, regard each old man among the Moslems as thy father, the young men as thy brothers, the women as thy sisters. O Harun, I fear lest thy handsome visage be scorched by the flames of hell. Fear the Most High, and know that He will interrogate thee on the Day of Resurrection." At these words, Harun-al-Rashid wept copiously. Then Fazl said to Fudhayl, "Say no more; you have killed the Caliph with grief." "Oh Haman!" Fudhayl answered, "it is not I, it is thou and thy relations who have misled the Caliph and destroyed him." Hearing these words, Harun-al-Rashid wept still more bitterly, and said to Fazl, "Be silent! If he has called you Haman, he has (tacitly) compared me to Pharaoh." Then, addressing Fudhayl, he asked him, "Have you any debt to pay?" "Yes," he answered, "that of the service which I owe to the Most High. He furnishes me with subsistence, I have no need to borrow." Then Harun-al-Rashid placed in Fudhayl's hand a purse in which were a thousand pieces of gold, saying, "This money is lawfully acquired, I have inherited it from my mother." "Ah!" exclaimed Fudhayl, "my advice has been wasted; my object in giving it was to lighten thy burden; thou seekest to make mine more heavy." At these words, Harun-al-Rashid rose, saluted him, and departed. All the way home he kept repeating to himself, "This Fudhayl is a great teacher." On another occasion the Caliph is reported to have said to Fudhayl, "How great is thy self-abnegation," to which Fudhayl made answer, "Thine is greater." "How so?" said the Caliph. "Because I make abnegation of this world, and thou makest abnegation of the next; now this world is transitory, and the next will endure for ever."

Sofian Tsavri relates the following anecdote. "One night I was talking with Fudhayl, and after we had been conversing on all kinds of subjects, I said to him, 'What a pleasant evening we have had, and what interesting conversation.' 'No,' he said, 'neither the evening nor the conversation have been good.' 'Why so?' I remarked. 'Because,' he said, 'you sought to speak words which might please me, and I sought to answer so as to gratify you. Both of us, pre-occupied with our talk, had forgotten the Most High. It would be better for each of us to sit still in his place and to lift up his heart towards God.'"

A stranger coming to Fudhayl one day was asked by the latter for what purpose he came. "I have come," he answered, "to talk with you, and to find in so doing calm of mind," "That is to say," broke in Fudhayl, "you wish to mislead me with lies, and desire me to do the same to you. Be off about your business."

But with all his austerity of life, his prolonged fasts and watchings, his ragged dress and wearisome pilgrimages, he preferred the practice of interior virtue and purity of intention to all outward observances, and used often to say that "he who is modest and compliant to others and lives in meekness and patience gains a higher reward by so doing than if he fasted all his days and watched in prayer all his nights." At so high a price did he place obedience to a spiritual guide, and so necessary did he deem it, that he declared, "Had I a promise of whatever I should ask in prayer, yet would I not offer that prayer save in union with a superior."

But his favourite virtue was the love of God in perfect conformity to His will above all hope or fear. Thus, when his only son (whose virtues resembled his father's) died in early age, Fudhayl was seen with a countenance of unusual cheerfulness, and, being asked by his intimate disciple, Abou Ali, the reason wherefore, he answered, "It was God's good pleasure, and it is therefore my good pleasure also."

Others of his sayings are the following: "To leave aught undone for the esteem of men is hypocrisy, and to do ought for their esteem is idolatry." "Much is he beguiled who serves God for fear or hope, for His true service is for mere love." "I serve God because I cannot help serving Him for very love's sake."