Cult of the Dead 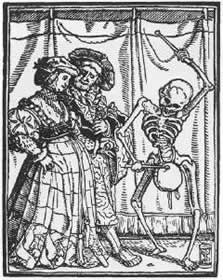 [This is taken from Religion of the Celts]

By J. A. MacCulloch.

The custom of burying grave-goods with the dead, or slaying wife or slaves on the tomb, does not necessarily point to a cult of the dead, yet when such practices survive over a long period they assume the form of a cult. These customs flourished among the Celts, and, taken in connection with the reverence for the sepulchers of the dead, they point to a worship of ancestral spirits as well as of great departed heroes.  Heads of the slain were offered to the “strong shades”—the ghosts of tribal heroes whose praises were sung by bards.[532] When such heads were placed on houses, they may have been devoted to the family ghosts.  The honor in which mythic or real heroes were held may point to an actual cult, the hero being worshipped when dead, while he still continued his guardianship of the tribe. We know also that the tomb of King Cottius in the Alps was a sacred place, that Irish kings were often inaugurated on ancestral burial cairns, and that Irish gods were associated with barrows of the dead.[533]

The cult of the dead culminated at the family hearth, around which the dead were even buried, as among the Aeduii; this latter custom may have been general.[534] In any case the belief in the presence of ancestral ghosts around the hearth was widespread, as existing superstitions show.  In Brittany the dead seek warmth at the hearth by night, and a feast is spread for them on All Souls’ eve, or crumbs are left for them after a family gathering.[535] But generally the family ghost has become a brownie, lutin, or pooka, haunting the hearth and doing the household work.[536] Fairy corresponds in all respects to old ancestral ghost, and the one has succeeded to the place of the other, while the fairy is even said to be the ghost of a dead person.[537] Certain archaeological remains have also a connection with this ancient cult. Among Celtic remains in Gaul are found andirons of clay, ornamented with a ram’s head. M. Dechelette sees in this “the symbol of sacrifice offered to the souls of ancestors on the altar of the hearth.”[538] The ram was already associated as a sacrificial animal with the cult of fire on the hearth, and by an easy transition it was connected with the cult of the dead there. It is found as an emblem on ancient tombs, and the domestic Lar was purified by the immolation of a ram.[539] Figurines of a ram have been found in Gaulish tombs, and it is associated with the god of the underworld.[540] The ram of the andirons was thus a permanent representative of the victim offered in the cult of the dead. A mutilated inscription on one of them may stand for Laribus augustis, and certain markings on others may represent the garlands twined round the victim.[541] Serpents with rams’ heads occur on the monuments of the underworld god. The serpent was a chthonian god or the emblem of such a god, and it may have been thought appropriate to give it the head of an animal associated with the cult of the dead.

The dead were also fed at the grave or in the house. Thus cups were placed in the recess of a well in the churchyard of Kilranelagh by those interring a child under five, and the ghost of the child was supposed to supply the other spirits with water from these cups.[542] In Ireland, after a death, food is placed out for the spirits, or, at a burial, nuts are placed in the coffin.[543] In some parts of France, milk is poured out on the grave, and both in Brittany and in Scotland the dead are supposed to partake of the funeral feast.[544] These are survivals from pagan times and correspond to the rites in use among those who still worship ancestors. In Celtic districts a cairn or a cross is placed over the spot where a violent or accidental death has occurred, the purpose being to appease the ghost, and a stone is often added to the cairn by all passers-by.[545]

Festivals were held in Ireland on the anniversaries of the death of kings or chiefs, and these were also utilized for purposes of trade, pleasure, or politics. They sometimes occurred on the great festivals, e.g. Lugnasad and Samhain, and were occasionally held at the great burial-places.[546] Thus the gathering at Taillti on Lugnasad was said to have been founded by Lug in memory of his foster-mother, Tailtiu, and the Leinstermen met at Carman on the same day to commemorate King Garman, or in a variant account, a woman called Carman. She and her sons had tried to blight the corn of the Tuatha De Danann, but the sons were driven off and she died of grief, begging that a fair should always be held in her name, and promising abundance of milk, fruit, and fish for its observance.[547] These may be etiological myths explaining the origin of these festivals on the analogy of funeral festivals, but more likely, since Lugnasad was a harvest festival, they are connected with the custom of slaying a representative of the corn-spirit. The festival would become a commemoration of all such victims, but when the custom itself had ceased it would be associated with one particular personage, the corn-goddess regarded as a mortal.

This would be the case where the victim was a woman, but where a male was slain, the analogy of the slaying of the divine king or his succedaneum would lead to the festivals being regarded as commemorative of a king, e.g. Garman. This agrees with the statement that observance of the festival produced plenty; non-observance, dearth.  The victims were slain to obtain plenty, and the festival would also commemorate those who had died for this good cause, while it would also appease their ghosts should these be angry at their violent deaths.  Certain of the dead were thus commemorated at Lugnasad, a festival of fertility. Both the corn-spirit or divinity slain in the reaping of the corn, and the human victims, were appeased by its observance.[548] The legend of Carman makes her hostile to the corn—a curious way of regarding a corn-goddess. But we have already seen that gods of fertility were sometimes thought of as causing blight, and in folk-belief the corn-spirit is occasionally believed to be dangerous.  Such inversions occur wherever revolutions in religion take place.

The great commemoration of the dead was held on Samhain eve, a festival intended to aid the dying powers of vegetation, whose life, however, was still manifested in evergreen shrubs, in the mistletoe, in the sheaf of corn from last harvest—the abode of the corn-spirit.[549] Probably, also, human representatives of the vegetation or corn-spirit were slain, and this may have suggested the belief in the presence of their ghosts at this festival. Or the festival being held at the time of the death of vegetation, the dead would naturally be commemorated then. Or, as in Scandinavia, they may have been held to have an influence on fertility, as an extension of the belief that certain slain persons represented spirits of fertility, or because trees and plants growing on the barrows of the dead were thought to be tenanted by their spirits.[550] In Scandinavia, the dead were associated with female spirits or fylgjur, identified with the disir, a kind of earth-goddesses, living in hollow hills.[551] The nearest Celtic analogy to these is the Matres, goddesses of fertility. Bede says that Christmas eve was called Modranicht, “Mothers’ Night,”[552] and as many of the rites of Samhain were transferred to Yule, the former date of Modranicht may have been Samhain, just as the Scandinavian Disablot, held in November, was a festival of the disir and of the dead.[553] It has been seen that the Celtic Earth-god was lord of the dead, and that he probably took the place of an Earth-goddess or goddesses, to whom the Matres certainly correspond. Hence the connection of the dead with female Earth-spirits would be explained. Mother Earth had received the dead before her place was taken by the Celtic Dispater. Hence the time of Earth’s decay was the season when the dead, her children, would be commemorated. Whatever be the reason, Celts, Teutons, and others have commemorated the dead at the beginning of winter, which was the beginning of a new year, while a similar festival of the dead at New Year is held in many other lands.

Both in Ireland and in Brittany, on November eve food is laid out for the dead who come to visit the houses and to warm themselves at the fire in the stillness of the night, and in Brittany a huge log burns on the hearth. We have here returned to the cult of the dead at the hearth.[554] Possibly the Yule log was once a log burned on the hearth—the place of the family ghosts—at Samhain, when new fire was kindled in each house. On it libations were poured, which would then have been meant for the dead. The Yule log and the log of the Breton peasants would thus be the domestic aspect of the fire ritual, which had its public aspect in the Samhain bonfires.

All this has been in part affected by the Christian feast of All Souls.  Dr. Frazer thinks that the feast of All Saints (November 1st) was intended to take the place of the pagan cult of the dead. As it failed to do this, All Souls, a festival of all the dead, was added on November 2nd.[555] To some extent, but not entirely, it has neutralized the pagan rites, for the old ideas connected with Samhain still survive here and there. It is also to be noted that in some cases the friendly aspect of the dead has been lost sight of, and, like the sid-folk, they are popularly connected with evil powers which are in the ascendant on Samhain eve.

[537] Kennedy, 126. The mischievous brownie who overturns furniture and smashes crockery is an exact reproduction of the Poltergeist.

[541] Dechelette, 257-258. In another instance the ram is marked with crosses like those engraved on images of the underworld god with the hammer.

[546] Names of places associated with the great festivals are also those of the chief pagan cemeteries, Tara, Carman, Taillti, etc. (O’Curry, MC ii. 523).

[550] See Vigfusson-Powell, Corpus Poet. Boreale, i. 405, 419. Perhaps for a similar reason a cult of the dead may have occurred at the Midsummer festival.

This is taken from Religion of the Celts.