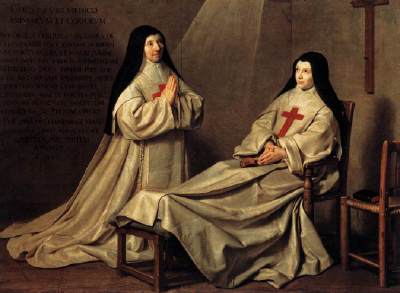 THE angels are pure spirits. They have no body. Consequently the worship they render God is spiritual, interior.

The heavenly bodies are not spiritual, but entirely material substances. They render God a sort of external worship according to the words of the prophet Daniel, "Sun and moon bless the Lord, . . . stars of heaven bless the Lord. Praise and exalt Him forever." Man has a soul, a spiritual substance similar to the heavenly bodies. He should, therefore, honor God by the twofold form of worship, interior and exterior.

"God is a spirit; and they that adore Him must adore Him in spirit and in truth" (John iv. 24).

From these words of the beloved disciple we are not to conclude that interior worship is prescribed as the only essential, and exterior worship condemned. True piety must manifest itself externally. Man naturally manifests his feelings by outward signs and ceremonies.

The Catholic Church recognizes that man has a heart to be moved as well as an intellect to be enlightened. She enlightens the intellect by her good books, sermons, etc.; and she moves the heart by the grandeur of her ceremonies.

If any one doubts that God considers ceremonies necessary to divine worship, let him read the books of Leviticus and Exodus. Almost the whole of these books treats of the rites and ceremonies used by the then chosen people of God in their public worship.

The 26th, 27th, and 28th chapters of Exodus prescribe the form of the tabernacle and its appurtenances, the size of the altar and the oil for the lamps, and the holy vestments which Aaron and his sons were to wear during the performance of the public ceremonies.

The book of Leviticus treats more particularly of the sacrifices, rites, and ceremonies of the priests and Levites.

"And the Lord called Moses, and spoke to him from the tabernacle of the testimony, saying: Speak to the children of Israel, and thou shalt say to them: The man among you that shall offer to the Lord a sacrifice of the cattle, that is, offering victims of oxen and sheep, if his offering be a holocaust and of the herd, he shall offer a male, without blemish, at the door of the tabernacle of the testimony, to make the Lord favorable to him. And he shall put his hand upon the head of the victim, and it shall be acceptable and help to his expiation" (Lev. i. 1 et seq.).

After enumerating all the sacrifices and ceremonies, the sacred writer closes the book of Leviticus with the words, "These are the precepts which the Lord commanded Moses for the children of Israel in Mount Sinai," thus showing that He considers ceremonies necessary to divine worship.

The religion instituted by Our Lord and Saviour Jesus Christ is more spiritual than that of the Old Law. Nevertheless He did not discard ceremonies. In the Garden of Gethsemani He fell upon His knees in humble supplication. He went in procession to Jerusalem preceded by a great multitude strewing palm-branches on the road and singing, "Hosanna to the Son of David." Before He cured the deaf and dumb man, He put His fingers into his ears and touched his tongue with spittle, and looking up to heaven He groaned and said, "Ephpheta," which is, "Be thou opened."

At the Last Supper He invoked a blessing on the bread and wine, and after the supper He chanted a hymn with His disciples—ceremonies similar to those used in the Mass. When He imparted the Holy Ghost to His apostles, He breathed upon them. In a similar way they and their successors communicated the Holy Ghost upon others by breathing upon them, laying their hands upon them and praying over them, when conferring the sacrament of Holy Orders.

St. James directs that if any man is sick he shall call in a priest of the Church, who shall anoint him with oil, as is done in the sacrament of Extreme Unction.

We must, therefore, admit that ceremonies used in the worship of God are reasonable, since they are sanctioned by God in the Old Law and by Jesus Christ and His apostles in the New Testament.

All these acts of Our Saviour—the prostration in the Garden, the procession to Jerusalem, the touching of the deaf man's ears, the chanting of the hymn, the laying on of hands, the anointing of the sick—are but so many ceremonies serving as models of the ceremonies used by the Catholic Church in her public worship and in the administration of her sacraments.