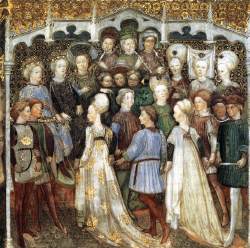 The Marriage Tie - One and Indissoluble

"But I say to you that whosoever shall put away his wife, excepting for the cause of fornication, maketh her to commit adultery; and he that shall marry her that is put away committeth adultery" (Matt. v. 33).

FEW practices of the Church have been productive of more good to society than that concerning Christian marriage. The Christian family is the foundation of Christian society, and Christian marriage is the basis of the Christian family. Without marriage neither the family nor society could exist. Marriage was instituted by God before society existed, and, as a natural consequence, it is subject not to the laws of society, but to the laws of God and His Church. The principal law and necessary condition of Christian marriage is its unity and indissolubility. It is the union of one man with one woman for the purposes intended by the Creator, which union is to last as long as both survive. Such was marriage in the beginning; to such it was restored by our Saviour when He made it a sacrament of His law and a type of His union with His Church.

The practice of the Catholic Church in not permitting a divorce that will allow either party to marry during the life of the other, is clearly taught by Jesus Christ in the 5th chapter of Matthew: "He who puts away his wife maketh her to commit adultery, and he that marrieth her committeth adultery."

No human power can break the bond of marriage. "What God hath joined together, let no man put asunder." It is the work of God. Let no man dare meddle with it. St. Paul teaches the same when he says in the 39th verse of the 7th chapter of the First Epistle to the Corinthians: "A woman is bound by the law as long as her husband liveth; but if her husband die, she is at liberty, let her marry whom she will." The practice of the Catholic Church is conformable to this teaching of Christ, St. Paul, the apostles, and their successors.

In defence of this practice of forbidding divorce, since marriage is one and indissoluble, the Catholic Church has had many a severe conflict. And had she not fought this battle bravely for the sanctity, the unity, and the indissolubility of the marriage tie, Europe and America would today be in as degraded a condition as are the Mahometan and other nations where the laws of marriage are disregarded. For divorces are not only contrary to Christ's teaching concerning the sanctity, unity, and indissolubility of the marriage tie, but are also subversive of society. They sever the marriage tie inasmuch as the law of man can do it. If the marriage tie is loosened, the family is dissolved; and if the family is dissolved, society, the state, falls to ruin. Divorce destroys conjugal love, causes unhappiness, renders the proper education of children impossible, and often leads to terrible crimes. Is it not reasonable as well as scriptural to forbid it?

The Christian husband and wife, knowing the sanctity, the unity, and the indissolubility of the marriage tie, live in love and peace and honor together; together they rear the issue of their union, teaching them to be good children, good citizens, and good Christians; together, after a long, a prosperous, and a happy union, they return to dust; and together they will meet again beyond the confines of the tomb—yes, they will meet to part no more.