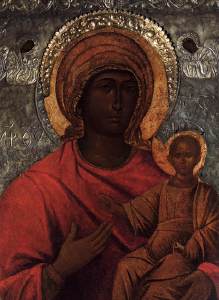 "Then they laid their hands upon them, and they received the Holy Ghost" (Acts viii. 17).

BEFORE the coming of the Holy Ghost on Pentecost, the apostles were weak and vacillating. One of them betrayed his Master for thirty pieces of silver; another—the Prince of the Apostles, he whom Christ afterward made head of His Church—thrice denied his Lord and his God.

After the descent of the Holy Ghost, what a change! What a wonderful transformation! They who before had been as timid as the lamb, as changeable as the chameleon's hue, became now as bold as the lion, as firm as Gibraltar's rock.

In a similar way does Confirmation act on the receiver. Confirmation is that sacrament in which, by the imposition of the bishop's hands, we receive the Holy Ghost to make us strong and perfect Christians and soldiers of Jesus Christ. It is the second in the order of the sacraments, because the early Christians were accustomed to receive it immediately after Baptism. In the 8th chapter of the Acts of the Apostles we find the first recorded instance of the administering of Confirmation by the apostles. Here we are told that St. Peter and St. John confirmed the Samaritans who had been baptized by Philip. "They prayed for them that they might receive the Holy Ghost. . . . Then they laid their hands upon them, and they received the Holy Ghost." In a similar way does the bishop, the successor of the apostles, administer Confirmation at the present day. First, he turns toward those to be confirmed and says: "May the Holy Ghost come down upon you and the power of the Most High keep you from sin." Then extending his hands over them he prays that they may receive the Holy Ghost.

In the 6th verse of the 19th chapter of the Acts the sacred writer, after telling about the baptism of the disciples at Ephesus, adds: "And when Paul had laid his hands upon them the Holy Ghost came on them." In the 6th chapter of the Epistle to the Hebrews St. Paul mentions Confirmation, the laying on of hands, with Baptism and Penance, as among the principal practices of Christianity.

The sacrament of Confirmation has been administered to the faithful of every age from the time of Christ until the present. We learn this from the Fathers and writers of the various ages. Among them St. Clement says: "All must make haste to be confirmed by a bishop, and receive the sevenfold grace of the Holy Ghost." The practice of administering Confirmation is founded on tradition, then, as well as on Scripture. Is it not reasonable to believe and practise that which the Christian Church of every age believed and practised?

The apostles of Christ administered Confirmation by praying that the faithful may receive the Holy Ghost and laying their hands upon them. The successors of the apostles do likewise. Who will say that this practice is not reasonable? Baptism gives spiritual life; Confirmation increases it. Baptism makes persons children of God; Confirmation strengthens them, causes them to grow, and makes them strong men and soldiers of Jesus Christ.