Devotion to the Blessed Sacrament 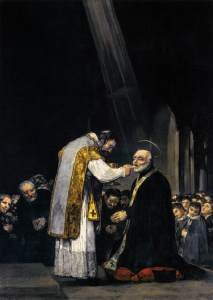 "And whilst they were at supper, Jesus took bread, and blessed, and broke, and gave to His disciples, and said: take ye and eat. This is My body"
(Matt. xxvi. 26).

PERHAPS no mystery of revelation has been so universally attacked as the Real Presence of Jesus Christ in the Blessed Sacrament of the Altar.

By the Real Presence is meant that Jesus Christ is really and truly, body and blood, soul and divinity, present in the Blessed Sacrament, under the form and appearance of bread and wine.

This teaching of the Church is in perfect agreement with Scripture, tradition, and reason.

If the reader will take up his Bible and read carefully the 6th chapter of the Gospel according to St. John; the 26th chapter, 26th, 27th, and 28th verses of St. Matthew; the 14th chapter, 22d verse of St. Mark; the First Epistle of St. Paul to the Corinthians, 10th chapter, 16th verse, as well as other portions of the New Testament, he will certainly see that the Catholic teaching and practice concerning the Real Presence of Jesus Christ in the Blessed Sacrament are founded on Scripture. In this 6th chapter of St. John, we learn that before instituting the Blessed Sacrament Our Saviour wished to announce or promise it to His disciples in order to prepare them for it. He first gave them a figure of the Blessed Sacrament in the multiplication of the five loaves of bread by which He fed five thousand persons. After this miracle He told them that He would give them bread superior to that which they had eaten, and that this bread was His own flesh and blood. "The bread that I will give is My flesh, for the life of the world." It is almost impossible to understand these words of Our Lord in any other than a literal sense. He was so understood by those who heard Him. "How can this man give us his flesh to eat?" they said, and many withdrew from Him. It is but reasonable to believe that if He did not wish to be understood in a literal sense He would have told His hearers so, rather than have them leave Him.

This promise of a doctrine so difficult to understand was fulfilled at the Last Supper.

Then Jesus took bread, and blessed, and broke, and gave to His disciples, and said: "Take ye and eat. This is My body." And taking the chalice He gave thanks; and gave to them, saying: "Drink ye all of this. For this is My blood of the new testament which shall be shed for many for the remission of sins."

"Do this for a commemoration of Me."

These are substantially the words of SS. Matthew, Mark, Luke, and of the apostle Paul.

In the 10th chapter of the First Epistle to the Corinthians, St. Paul says: "The chalice of benediction which we bless, is it not the communion of the blood of Christ? And the bread which we break, is it not the partaking of the body of the Lord?"

Any one of these texts abundantly proves the Catholic doctrine of the Real Presence, and shows the reasonableness of the Catholic practice regarding the Blessed Sacrament. Reflect upon them. Reflect especially upon the words of Christ, "This is My body." Think what an insult it is to the divinity and veracity of Christ to doubt His word, because you can not understand how what appears to be bread is in reality His own body and blood.

If you remember that Jesus Christ is God, that He had the power to make this change, that He could confer this power on others, as the apostles and their successors, that He did so when He said: "Do this in commemoration of Me," and that this change at the present time as at the time of the apostles is made by His almighty power, you will have no difficulty in believing it.

The belief and practice of the Catholic Church of to-day regarding the Blessed Sacrament is the same as it was in every age since the time of Christ. The history of every century tells us this. The Fathers, Doctors, and Church writers of every age say the same. If it were not so, some one ought to be able to find the time when the doctrine was invented, and the person who invented it. But, since no one has been able to find the inventor of this doctrine and practice, the time or place of the invention, we rightly conclude that they came down to us from the time of Christ, and had Christ for an author. (Berengarius, in the eleventh century, was the first who denied this doctrine.) If, then, Christ is the author, is not the Catholic practice reasonable?

But I don't understand the Catholic doctrine regarding the Blessed Sacrament, some one may say; therefore it is contrary to reason. Dear reader, did the consummate puerility, silliness, foolishness of such an objection ever present itself to you? Do you understand the Blessed Trinity? And is it contrary to reason? No. Although above reason, it is not against it. Do you understand how Jesus Christ is both God and man? Do you understand any mystery? No. If you did it would no longer be a mystery. For a mystery is something above human intelligence. It is something incomprehensible to us, for it pertains to the divine intelligence. And as well might you attempt to pour the mighty ocean into a small hole on the shore, as attempt to hold with your limited capacity the illimitable ocean of divinity. The proper office of reason is to examine the evidences of revelation, and see if God has spoken. But it constitutes no part of its office to dispute the word of God. That God has spoken is evident from the fulfilment of many prophecies and the authority of many miracles. That these prophecies have been fulfilled, and these miracles performed, is as certain as is any historical fact. Reason teaches us this. It teaches us, too, that no one but God (or by the power of God) can prophesy; no one but God can derogate from the order of nature, by the performance of a miracle. Reason teaches us, then, that God has spoken. When we know God speaks, genuine reason will dictate that we humbly believe His holy word. Thus will true reason ever act. And when God says, "This is My body," it will not hesitate to believe.

We all believe that at the baptism of Our Saviour by St. John Baptist, the Holy Ghost appeared in the form of a dove. Now, is it not as reasonable for Jesus Christ, the second person of the Blessed Trinity, to appear in the form of bread as it was for the Holy Ghost, the third person of the Trinity, to appear in the form of a dove? We must therefore admit that the Catholic doctrine of the Real Presence of Jesus Christ in the Blessed Sacrament is reasonable; that it has been believed by the Christian Church of every age from the time of Christ until the present time; and that it is taught by SS. Matthew, Mark, Luke, and John, and by St. Paul in clear and unmistakable terms.