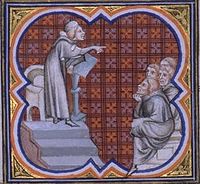 AMALRIC (Fr. AMAURY) OF BENA (d.c. 1204-1207), French theologian, was born in the latter part of the 12th century at Bena, a village in the diocese of Chartres.  He taught philosophy and theology at the university of Paris and enjoyed a great reputation as a subtle dialectician; his lectures developing the philosophy of Aristotle attracted a large circle of hearers.  In 1204 his doctrines were condemned by the university, and, on a personal appeal to Pope Innocent III., the sentence was ratified, Amalric being ordered to return to Paris and recant his errors. His death was caused, it is said, by grief at the humiliation to which he had been subjected.  In 1209 ten of his followers were burnt before the gates of Paris, and Amalric’s own body was exhumed and burnt and the ashes given to the winds.  The doctrines of his followers, known as the Amalricians, were formally condemned by the fourth Lateran Council in 1215. Amalric appears to have derived his philosophical system from Erigena, whose principles he developed in a one-sided and strongly pantheistic form.  Three propositions only can with certainty be attributed to him: (1) that God is all; (2) that every Christian is bound to believe that he is a member of the body of Christ, and that this belief is necessary for salvation: (3) that he who remains in love of God can commit no sin.  These three propositions were further developed by his followers, who maintained that God revealed Himself in a threefold revelation, the first in Abraham, marking the epoch of the Father; the second in Christ, who began the epoch of the Son; and the third in Amalric and his disciples, who inaugurated the era of the Holy Ghost.  Under the pretext that a true believer could commit no sin, the Amalricians indulged in every excess, and the sect does not appear to have long survived the death of its founder.