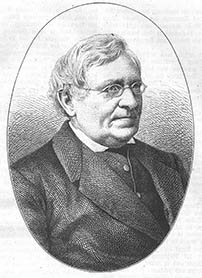 ALZOG, JOHANN BAPTIST (1808-1878), German theologian, was born at Ohlau, in Silesia, on the 29th of June 1808.  He studied at Breslau and Bonn and was ordained priest at Cologne in 1834.  In the following year he accepted the chairs of exegesis and church history at the seminary of Posen.  He removed in 1844 to Hildesheim, where he had been appointed rector of the seminary.  He became professor of church history at the university of Freiburg in the Breisgau in 1853 and held that post till his death on the 1st of March 1878.  Together with Dollinger, Alzog was instrumental in convoking the famous Munich assembly of Catholic scholars in 1863.  He also took part, with Bishops Hefele and Haseberg, in the preparatory work of the Vatican Council and voted in favour of the doctrine of papal infallibility but against the opportuneness of its promulgation.  Alzog’s fame rests mainly on his Handbuch den Caniversal-Kirchengeschichte (Mainz, 1841, often reprinted under various titles; Eng.  trans. by Pabisch and Byrne, A Manual of Church History, 4 vols.  Cincinnati, 1874).  Based upon the foundations laid by Mohler, this manual was generally accepted as the best exposition of Catholic views, in opposition to the Protestant manual by C. A. Hase, and was translated into several languages.  Besides a host of minor writings on ecclesiastical subjects, and an active collaboration in the great Kirchen- lexicon of Wetzer and Welte, Alzog was also the author of Grundriss der Patrologic (Freiburg, 1866, 4th ed. 1888), a scholarly work, though now superseded by that of O. Bardenhewer.