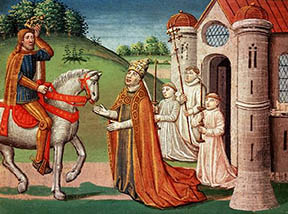 Adrian I to Adrian VI

ADRIAN, or HADRIAN (Lat. Hadrianus), the name of six popes. ADRIAN I., pope from 772 to 705, was the son of Theodore, a Roman nobleman.  Soon after his accession the territory that had been bestowed on the popes by Pippin was invaded by Desiderius, king of the Lombards, and Adrian found it necessary to invoke the aid of Charlemagne, who entered Italy with a large army, besieged Desiderius in his capital of Pavia, took that town, banished the Lombard king to Corbie in France and united the Lombard kingdom with the other Frankish possessions.  The pope, whose expectations had been aroused, had to content himself with some additions to the duchy of Rome, and to the Exarchate, and the Pentapolis.  In his contest with the Greek empire and the Lombard princes of Benevento, Adrian remained faithful to the Frankish alliance, and the friendly relations between pope and emperor were not disturbed by the difference which arose between them on the question of the worship of images, to which Charlemagne and the Gallican Church were strongly opposed, while Adrian favored the views of the Eastern Church, and approved the decree of the council of Nicaea (787), confirming the practice and excommunicating the iconoclasts.  It was in connection with this controversy that Charlemagne wrote the so-called Libri Carolini, to which Adrian replied by letter, anathematizing all who refused to worship the images of Christ, or the Virgin, or saints.  Notwithstanding this, a synod, held at Frankfort in 794, anew condemned the practice, and the dispute remained unsettled at Adrian’s death.  An epitaph written by Charlemagne in verse, in which he styles Adrian “father,” is still to be seen at the door of the Vatican basilica.  Adrian restored the ancient aqueducts of Rome, and governed his little state with a firm and skilful hand.

ADRIAN II., pope from 867 to 872, was a member of a noble Roman family, and became pope in 867, at an advanced age.  He maintained, but with less energy, the attitude of his predecessor.  Rid of the affair of Lothair, king of Lorraine, by the death of that prince (869), he endeavored in vain to mediate between the Frankish princes with a view to assuring to the emperor, Louis II., the heritage of the king of Lorraine.  Photius, shortly after the council in which he had pronounced sentence of deposition against Pope Nicholas, was driven from the patriarchate by a new emperor, Basil the Macedonian, who favored his rival Ignatius.  An ecumenical council (called by the Latins the 8th) was convoked at Constantinople to decide this matter.  At this council Adrian was represented by legates, who presided at the condemnation of Photius, but did not succeed in coming to an understanding with Ignatius on the subject of the jurisdiction over the Bulgarian converts.  Like his predecessor Nicholas, Adrian II. was forced to submit, at least in temporal affairs, to the tutelage of the emperor, Louis II., who placed him under the surveillance of Arsenius, bishop of Orta, his confidential adviser, and Arsenius’s son Anastasius, the librarian.  Adrian had married in his youth, and his wife and daughter were still living.  They were carried off and assassinated by Anastasius’s brother, Eleutherius, whose reputation, however, suffered but a momentary eclipse.  Adrian died in 872.

ADRIAN IV. (Nicholas Breakspear), pope from 1154 to 1159, the only Englishman who has occupied the papal chair, was born before A.D. 1100 at Langley near St Albans in Hertfordshire, His father was Robert, a priest of the diocese of Bath, who entered a monastery and left the boy to his own resources.  Nicholas went to Paris and finally became a monk of the cloister of St Rufus near Arles.  He rose to be prior and in 1137 was unanimously elected abbot.  His reforming zeal led to the lodging of complaints against him at Rome; but these merely attracted to him the favorable attention of Eugenius III., who created him cardinal bishop of Albano.  From 1152 to 1154 Nicholas was in Scandinavia as legate, organizing the affairs of the new Norwegian archbishopric of Trondhjem, and making arrangements which resulted in the recognition of Upsala as seat of the Swedish metropolitan in 1164.  As a compensation for territory thus withdrawn the Danish archbishop of Lund was made legate and perpetual vicar and given the title of primate of Denmark and Sweden.  On his return Nicholas was received with great honor by Anastasius IV., and on the death of the latter was elected pope on the 4th of December 1154.  He at once endeavored to compass the overthrow of Arnold of Brescia, the leader of anti-papal sentiment in Rome.  Disorders ending with the murder of a cardinal led Adrian shortly before Palm Sunday 1155 to take the previously-unheard-of step of putting Rome under the interdict.  The senate thereupon exiled Arnold, and the pope, with the impolitic co-operation of Frederick I. Barbarossa, was instrumental in procuring his execution.  Adrian crowned the emperor at St Peter’s on the 18th of June 1155, a ceremony which so incensed the Romans that the pope had to leave the city promptly, not returning till November 1156.  With the aid of dissatisfied barons, Adrian brought William I. of Sicily into dire straits; but a change in the fortunes of war led to a settlement (June 1156) not advantageous to the papacy and displeasing to the emperor.  At the diet of Besancon in October 1157, the legates presented to Barbarossa a letter from Adrian which alluded to the beneficia conferred upon the emperor, and the German chancellor translated this beneficia in the feudal sense.  In the storm which ensued the legates were glad to escape with their lives, and the incident at length closed with a letter from the pope, declaring that by beneficium he meant merely bonum factum. The breach subsequently became wider, and Adrian was about to excommunicate the emperor when he died at Anagnia on the 1st of September 1159.  A controversy exists concerning an embassy sent by Henry II. of England to Adrian in 1155.  According to the elaborate investigation of Thatcher, the facts seem to be as follows.  Henry asked for permission to invade and subjugate Ireland, in order to gain absolute ownership of that isle.  Unwilling to grant a request counter to the papal claim (based on the forged Donation of Constantine) to dominion over the islands of the sea, Adrian made Henry a conciliatory proposal, namely, that the king should become hereditary feudal possessor of Ireland while recognizing the pope as overlord.  This compromise did not satisfy Henry, so the matter dropped; Henry’s subsequent title to Ireland rested on conquest, not on papal concession, and was therefore absolute.  The much-discussed bull Laudabiliter is, however, not genuine.  See Herzog-Hauck, Realencyklopadie, 3rd ed. (excellent bibliography), and Wetzer and Welte, Kirchenlexikon, 2nd ed., under “Hadrian IV.”; also Oliver J. Thatcher, Studies concerning Adriani IV‘. (The University of Chicago: Decennial Publications, 1st series, vol. iv., Chicago, 1903); R. Raby, Pope Adrian IV.: An Historical Sketch (London, 1849); and A. H.Tarleton, Life of Nicholas Breakspear (London, 1896)

ADRIAN V. (Ottobuono de’ Fieschi), pope in 1276, was a Genoese who was created cardinal deacon by his uncle Innocent IV.  In 1264 he was sent to England to mediate between Henry III.  and his barons.  He was elected pope to succeed Innocent V.  on the 11th of July 1276, but died at Viterbo on the 18th of August, without having been ordained even to the priesthood.

ADRIAN VI. (Adrian Dedel, not Boyens, probably not Rodenburgh, 1459-1523), pope from 1522 to 1523, was born at Utrecht in March 1459, and studied under the Brethren of the Common Life either at Zwolle or Deventer.  At Louvain he pursued philosophy, theology and canon law, becoming a doctor of theology (1491), dean of St Peter’s and vice-chancellor of the university.  In 1507 he was appointed tutor to the seven-year old Charles V. He was sent to Spain in 1515 on a very important diplomatic errand; Charles secured his succession to the see of Tortosa, and on the 14th of November 1516 commissioned him inquisitor-general of Aragon.  During the minority of Charles, Adrian was associated with Cardinal Jimenes in governing Spain.  After the death of the latter Adrian was appointed, on the 14th of March 1518, general of the reunited inquisitions of Castile and Aragon, in which capacity he acted till his departure from Tarragona for Rome on the 4th of August 1522: he was, however, too weak and confiding to cope with abuses which Jimenes had been able in some degree to check.  When Charles left for the Netherlands in 1520 he made Adrian regent of Spain: as such he had to cope with a very serious revolt.  In 1517 Leo X. had created him cardinal priest SS. Ioannis et Pauli; on the 9th of January 1522 he was almost unanimously elected pope.  Crowned in St Peter’s on the 31st of August at the age of sixty-three, he entered upon the lonely path of the reformer.  His programme was to attack notorious abuses one by one; but in his attempt to improve the system of granting indulgences he was hampered by his cardinals; and reducing the number of matrimonial dispensations was impossible, for the income had been farmed out for years in advance by Leo X.

The Italians saw in him a pedantic foreign professor, blind to the beauty of classical antiquity, penuriously docking the stipends of great artists.  As a peacemaker among Christian princes, whom he hoped to unite in a protective war against the Turk, he was a failure: in August 1523 he was forced openly to ally himself with the Empire, England, Venice, &c., against France; meanwhile in 1522 the sultan Suleiman I. had conquered Rhodes.  In dealing with the early stages of the Protestant revolt in Germany Adrian did not fully recognize the gravity of the situation.  At the diet which opened in December 1522 at Nuremberg he was represented by Chieregati, whose instructions contain the frank admission that the whole disorder of the church had perchance proceeded from the Curia itself, and that there the reform should begin.  However, the former professor and inquisitor-general was stoutly opposed to doctrinal changes, and demanded that Luther be punished for heresy.  The statement in one of his works that the pope could err in matters of faith (“haeresim per suam determinationem aut Decretalem assurondo”) has attracted attention; but as it is a private opinion, not an ex cathedra pronouncement, it is held not to prejudice the dogma of papal infallibility.  On the 14th of September 1523 he died, after a pontificate too short to be effective.